In November the mixologist from Auchterarder was named Craft Spirits Enthusiast in association with Eden Mill, at the SLTN Awards, after impressing judges with his indubitable knowledge of craft spirits.

Lachlan’s career path started with an early introduction to the hospitality industry, when as a boy he helped out his parents’ events company by setting up tables for wedding meals on a Saturday.

A job at The Gleneagles Hotel followed during his teenage years, something Lachlan described as a right of passage for teenagers in his hometown.

The short time you do spend at somewhere like Gleneagles has quite a big impact on you.

Moving on to bar work from a start in the resort’s former Deseo restaurant, it was here Lachlan was introduced to what he describes as world-class service.

“Even though I was only on the bar for less than half a year, the short time you do spend at somewhere like Gleneagles has quite a big impact on you,” he said.

“You could be serving sultans, sheikhs and royalty who naturally have high expectations, so you can’t really mess up. Learning five-star service from the guys behind the bar was a big learning curve for me; I saw how to do it properly.”

Having finished high school, city life was calling as Lachlan enrolled at Edinburgh Napier University to study marketing and French – skills he hopes to combine with his career in the drinks industry once he graduates.

The shift from the serenity of Auchterarder to the bustling heart of Edinburgh was a considerable one, but Lachlan said The Voodoo Rooms, with its reputation for quality cocktails, is a bar that had always interested him. 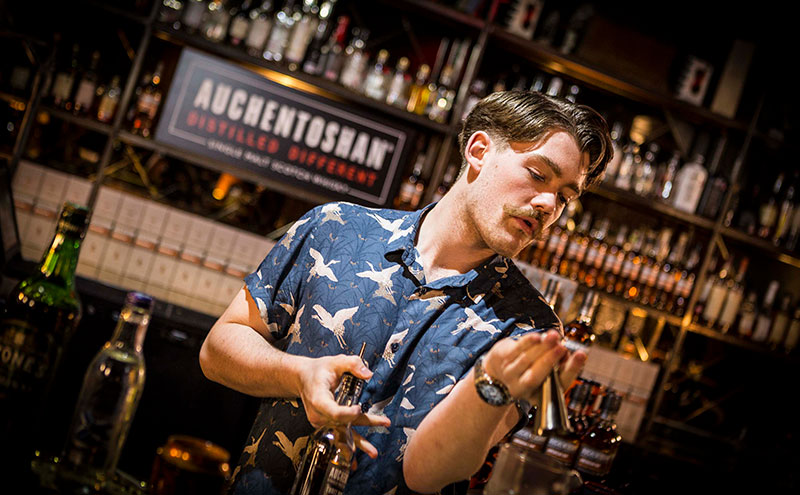 It was also a venue where the passion for flavours and ingredients instilled in him by his chef father could really be put into practice.

He said: “I watched my dad do it over the years as a chef; I found I understood that there are so many incredible combinations of flavours, textures and aromas that you can mix together and I don’t think people pay as much attention to this aspect of drinks as they should.

“For example, people get used to the flavour of certain whiskies when they are served neat, but you can mix these spirits and get totally different flavours and find completely new characteristics in the drink.

“Whisky is a passion of mine and I get quite sad when Scotsmen say they never like to mix their whisky with anything.

Scotland has such a vast selection of spirits at the moment that should be showcased.

“I respect it because I respect the product on its own but I think it would be good for people to open their eyes and see there’s more to these spirits than they think.”

This passion and thirst to learn everything he can about spirits led to him landing the coveted SLTN award – a moment he won’t forget.

“I must say it was a very good feeling,” said Lachlan.

“I knew I was up against two guys that were a lot older than me, so as soon as I got to the Hilton I thought, ‘I’m just happy to be here and I’ll enjoy the night’, but when my name was called out I was totally over the moon.”

And while he was modest when asked why he thinks he won the award, Lachlan’s passion for spirits – and Scottish drinks in particular – is plain to see.

“I guess when you love what you do it shows,” he said.

“Scotland has such a vast selection of spirits at the moment that I really feel should be showcased in some shape or form.

“I’m very Scottish and very enthusiastic about all things Scottish.”

Simple drinks are the most effective; they are the ones that will become classics.

Premium and super-premium brands are currently driving growth in the spirits market, with cocktails taking a growing share of drinks sales in pubs and bars.

And so it’s no surprise that cocktail competitions have become such an important part of many drinks companies’ marketing plans.

While these contests – such as Auchentoshan’s New Malt Order competition, in which Lachlan is preparing to compete in the global final – encourage mixologists to be as innovative as possible, Lachlan has a soft spot for more straightforward serves.

He said: “Simple drinks are the most effective – they are the ones that will become recognised classics.

“The easier it is to make, the more chance they have of becoming widely available. One of my favourite drinks to make, serve and drink right now is a sweet rye Manhattan. It’s a classic drink, that is super simple to make and it tastes phenomenal.”

With consumers more interested than ever in the qualities and back-stories behind the drinks they imbibe, bartenders have to employ continual learning going forward. And Lachlan predicts knowledge on both sides of the bar will rise.

“Over the next two years, I think we’ll see a lot more education take place for both bartenders and consumers,” he said.

“It’s great to see people who know their stuff in the bar and it will continue and grow.

“I feel personally that every Scot should know certain things about whisky and I love when people come into the bar and can teach me a thing or two.”

My favourite drink at the moment; a classic and undeniably elegant drink that stands the test of time.

A Dick Bradsell classic with a hint of Scottish charm from two of the country’s most exciting spirits brands.

Shake gin, lemon and sugar vigorously, strain into rocks glass, top with crushed ice and pour Braemble liqueur over the top. Garnish with lemon wedge and a bramble.

One of my drinks for our new cocktail menu, the Ron Swanson is, ironically, probably a drink he’d never touch – too much fruit and veg.

Dry shake all ingredients, add ice, then shake again. Double strain into goblet, garnish with another sage leaf and a few pink peppercorns.