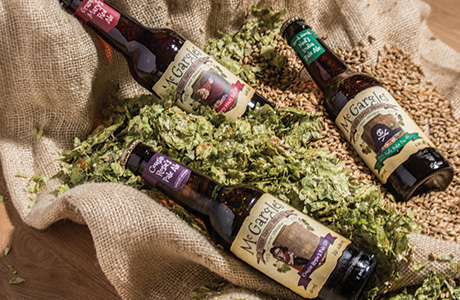 DRINKS importer Morgenrot has extended its beer portfolio with a trio of products from the Rye River Brewing Company in Ireland.
The beers, from the brewery’s McGargles Irish Family Brewers range, include Granny Mary’s Red Ale (4.4% ABV), Cousin Rosie’s Pale Ale (4.5% ABV) and Knock Knock Ned’s IPA (6.5% ABV).
Launched in 2014, Rye River Brewing Company is based in Kilcock, County Kildare, a town with a history of brewing dating back to 1595.
Graham Archibald, sales director at Morgenrot, which is sole distributor in the UK, said: “The beers are fun, high quality and have real personality and the timing couldn’t be better with interest in exciting craft beers north of the border continuing to boom.”
Rye River co-founder Niall Phelan added: “We believe many beer brands take themselves too seriously so wanted to create beers which pack a punch when it comes to taste but are also fun and approachable for the masses. After an incredible start last year, we are delighted to now be working with Morgenrot to bring our special beers to Scotland.”