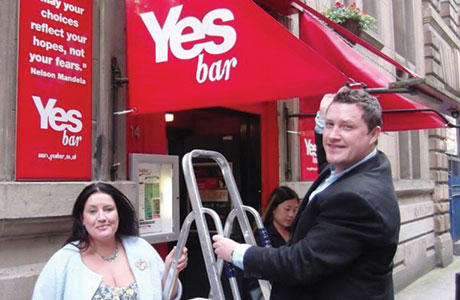 A GLASGOW bar owner has urged pro-independence operators to transform their premises into pop-up ‘Yesbars’ in the run up to the general election on May 7.
Jim McLaughlin, who together with wife Suzanne rebranded their Vespbar outlet on Drury Street as Yesbar ahead of the Scottish independence referendum last September, hopes other Scottish licensees will temporarily rename their bars for a four-week period from April 11 to May 9
He said: “We would like to reach out to fellow pro-indy publicans and give them the chance to rebrand their site temporarily, as a pop-up Yesbar in the run up to [the general election], and become a hub for pro-indy supporters and activists.
“We can also supply you with Yesbar 45 IPA on draught and our forthcoming Yes Lager.”