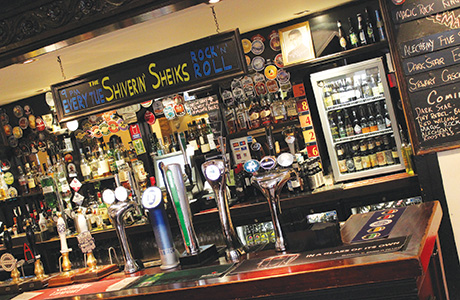 WITH so many breweries producing quality beer, putting together a range that covers every style and flavour can be a big ask for any outlet.
But bar managers in Glasgow and Edinburgh say bottled beers can help operators expand their outlet’s range without giving up space on the bar.
Where draught beers give publicans the opportunity to provide their customers with a drinking experience that can’t be replicated at home, the managers told SLTN that packaged products enable venues to stock the kind of variety most regulars won’t find in their kitchen fridge.
Jon McMillan, manager at Blackfriars in Glasgow, which currently stocks around 50 bottled beers, said American beers are among the current best sellers.
“We do a lot of stuff from around the world; Belgium, Germany, and the London beers are popular just now,” he said.
With so many beers to choose from, and with today’s publicans operating during a British brewing “boom”, there’s a lot to keep on top of when it comes to ranging.
McMillan said he leans on his experience in the trade and his relationships with the brewers when deciding what to stock.
“I generally get beer directly from the breweries,” he said.
“I’ve been here for ten years so I’ve got a good relationship with the breweries.”
There’s more to ranging than sticking to what you know, however, and McMillan said he is always on the look out for new beers for Blackfriars.
“A lot of the time I go down to London and try a couple of things,” he said.
“The main thing is the quality, we don’t just buy beer for the sake of having a lot of bottles.”
And while he is a dyed-in-the-wool cask ale drinker himself, McMillan said among his customers there is cross pollination between beer formats, if not between styles.
“I think folk who are into the [mainstream] lagers just drink that,” said McMillan.
“But guys who drink the bottles will drink the cask as well and vice versa.”
Bottled beers also account for a considerable amount of fridge space at Edinburgh venue The Potting Shed.
“We stock about 67 bottles and we basically cover a range of 24 from Scotland, 22 from England and a range from around Europe and the rest of the world,” said general manager Colin Piechniczek.

“[We stock] a selection of two from all the big brewers and beer from across the spectrum from light to dark.”
Scottish bottled beers are the flavour of the moment at the bar, according to Piechniczek, who said brews from Alechemy Brewing, Barney’s Beer, Drygate and Inveralmond Brewery are all proving popular with customers.
In addition to the packaged range, The Potting Shed also boasts 18 draught lines with five cask ale pumps.
Piechniczek said the range is sourced from a variety of places.
“The guys we tend to deal with on the keg range, we buy the bottles through; then everything else we deal with different distributors,” said Piechniczek.
When it comes to sourcing the rest of The Potting Shed’s bottled beer range, Piechniczek said he takes a ‘product-first’ approach to choosing suppliers.
“I’ll draw up a list of what we’d like to get in first then look at where I can get it,” he said.
Piechniczek acknowledged that the Scottish trade is operating during a brewing boom at the moment, with a lot to keep on top of, but he said technology can be a helpful tool for keeping abreast of brewers’ activities.
“We do a bit of market research [in pubs] and we keep an eye on social media,” he said.
“Some of the smaller brewers will drop hints.”