SET in 42 acres of the Flanders countryside on the outskirts of Leuven, Park Abbey in Heverlee, Belgium, stands almost unchanged since 1730.

The history of this abbey, which was founded in 1129, caught the attention of Heverlee local Joris Brams as a boy, and crept into his thoughts again as an adult in his role as a board director at C&C Group, the firm behind Tennent’s Lager and Magners.
Brams, who grew up within walking distance of the abbey, previously worked as group technical and development director at Scottish & Newcastle.

The monks of Heverlee brewed a lager for water purification.

It was during this time that he missed the beers from home and thought of Heverlee.
“I was always thinking, why would an abbey of this size not have a beer?” Brams told SLTN at the brewery in Belgium earlier this month.
“I never figured out why until I asked.”
Putting the question to the monks of the abbey, they allowed Brams to look through their library. There, he discovered that the Norbertine monks of Heverlee had at one time brewed a light drinking lager for water purification purposes.
Using the description found in the abbey’s archives, Brams and C&C Group worked with Martens Brewery in Bocholt, Belgium to produce Heverlee.
Another Belgian brand with local provenance, the brewery known today as Martens Brewery has been run by the same family since 1758.
However, unlike Park Abbey, a lot of things have changed since the 18th century at the Bocholt brewery.
During their 24-year tenure at the helm, brothers Jan and Fons Martens, the eighth generation to run the brewery, have grown the business exponentially.
Since 1990 the site has gone from producing 300,000 hectolitres per year to 3 million hectolitres per year.
Martens Brewery’s modern facilities and experience in exports, which make up 85% of the brewery’s production, made it ideal to produce Heverlee on a large scale. 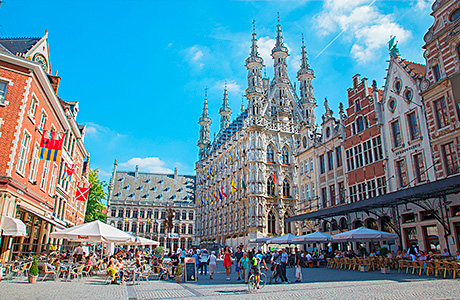 Working with the descriptions found in the Park Abbey archives, Brams and brewer Fons Martens produced a golden 4.8% ABV lager, a contrast with some of the higher gravity beers produced by other abbeys in the Flanders region of Belgium.
Heverlee was launched in the Scottish on-trade in 2013 and the beer has performed well, said Brams.

Royalties from the beer are used by the monks in their charitable works.

He claimed it has outperformed an initial target of “about 15,000 hectolitres” for the first six months, and is “exceeding” targets for year one.
Strong Heverlee sales don’t just benefit the brewers, as money spent on the beer in the Scottish trade finds its way back to the abbey in Heverlee.
The abbey’s Norbertine monks, who have taken a vow of poverty, use royalties from the beer to benefit the local community.
Projects include a vegetable garden, which was built by the monks and is tended by the order and those with special needs in the local community.
An abbey restoration project in partnership with the Flemish government and the city of Leuven is also underway, which is expected to total €35 million of combined investment over the next ten years.
But what next for the Heverlee brand?
Brams has further ambitions.
Walking past an apple press in the abbey’s courtyard on a sunny Saturday afternoon, Brams said cider is a real possibility “in the future” and a seasonal beer is also in the pipeline.
The seasonal brew will be developed from a white flower said to be unique to the abbey’s grounds – a flower which researchers from the University of Leuven have claimed may bestow “health benefits”.
And Brams’ ambition doesn’t stop at introducing more variants to the Heverlee brand.
“The second large project with the monks and city of Leuven government would be to build a brewery on this site [Park Abbey],” he said.