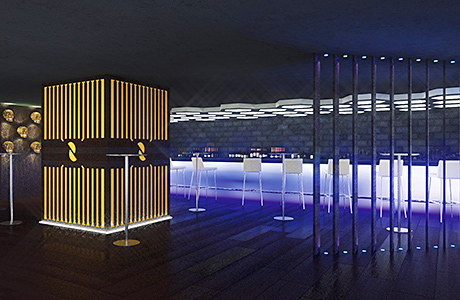 IT’S been lying dormant for 12 years, but now a forgotten Edinburgh nightclub has been wakened from its lengthy slumber.

The former ‘Time’ club in Frederick Street has been reborn as ‘Suva’ after being shut for more than a decade.
Now Mark Loney, director of operations, has reopened the 500-capacity venue after an 18-month transformation into a boutique club.
He has 18 years’ experience in the licensed trade including stints at Archaos, Cirque and Karbon in Glasgow.
For the past three years he ran a leisure firm which operated bars, nightclubs and restaurants in the Glasgow area, but Suva is his first venture in Scotland’s capital.
“It [the unit] had been closed for 12 years and was like the Mary Celeste when we got in,” Mark told SLTN.
“There were still old flyers kicking about from that period.”
Over the last 18 months £500,000 has been invested in the venue, which has been redesigned featuring a dramatic wall of golden skulls.
There are further skulls on other walls set within an array of hexagons which creates a hypnotic feature designed to resemble the inside of a beehive.
The nightclub also features a seating area with white couches and stools at the bar, lit by ultra violet lighting.
Mark dismissed comparisons with contemporary artist Damien Hirst’s famous diamond encrusted skull.
He added: “It’s just a design feature I’ve always liked and wanted to use, but there will be no cows in formaldehyde.”
The nightclub was designed by Glasgow-based Paul Martin Designs.
General manager Paul Connolly, who has knowledge of the Edinburgh trade after working for the Montpeliers group and Amicus Apple, is assisting Mark in the new venture.
Mark said: “Paul is from Edinburgh and he’s managed various bars in the city.
“I had met him a few times and it made sense to have him as general manager. The Edinburgh market is different from Glasgow and I think people expect a lot more, but they are happy to pay for it.”

The unit had been closed for 12 years and was like the Mary Celeste when we got in.