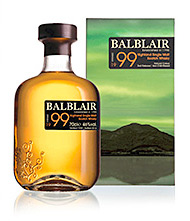 THE firm behind Balblair has launched the second batch of the distillery’s 1999 Vintage expression to independent and specialist retailers.

Following the first release of the 1999 Vintage, which was launched to global travel retailers in March of this year, the second batch of the whisky replaces the Balblair 1997 Vintage in the distillery’s portfolio of “core” expressions.
The new release is described as copper in appearance with aromas of honey and green apples.
The whisky is said to be full-bodied with a sweet and spicy character on the palate with hints of honey, vanilla and leather.
Gillian Gibson, global brand manager for Balblair, said the distillery is “excited to be launching the second release of the 1999 Vintage”.
“We are now able to offer consumers a core range of four Balblair expressions all in premium opening packaging,” said Gibson.
“With hints of refreshing green apple on the tongue, it is the perfect whisky to enjoy over the summer months.”
Balblair is part of the Inver House Distillers portfolio, along with single malt whiskies such as Old Pulteney and AnCnoc and blends that include Hankey Bannister.