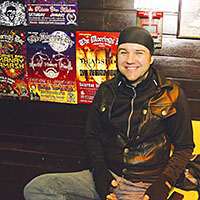 • Which beers do you recommend to your customers and why?
We have 20 draught beers on sale at any time, a further six cask ales, and another 50 (mostly imported) bottled beers. It’s not about recommending any one beer, rather we’ll take a moment to chat with the customer, and back up any recommendation with a taster. Having said that, for those people who like wheat beers we quite often recommend Windswept Weizen because it’s local and it’s really good! I just wish they’d brew it continuously.

• Best selling beer?
Tennent’s Lager, which makes up around 20% or our total draught beer sales. We’re a live music venue, so not every customer is interested in sampling the rest of our range, many of them are just looking for something reliable and familiar. As a Scottish freehold we believe that it’s important for the standard lager to actually be a Scottish one. In my opinion, Tennent’s is still the best standard lager in existence.

• Which beer did you most recently introduce?
We’ve just sourced Singha Lager on draught. The bottles already have a strong following, so this will help by freeing up some space in our fridges.

• How often do you introduce new beers?
We have 42 lines in total, with 21 of those devoted to draught beer, and a further 12 set aside for cask ale. The offering is continually changing. There’s always something new and exciting to try. We’re constantly seeking to improve the quality and diversity of our offering.

• Which qualities do you look for in a beer?
They must be high quality, they must have something to distinguish them, and they must be brewed in their country of origin. We won’t stock anything that is brewed under licence.

• How knowledgeable are your customers about beer?
People are becoming more cognisant of the condition of their pint, and that’s a good thing.
We made a huge investment in our cellars last year, minimising the length of our lines, installing a state of the art dispense system, upgrading the insulation, and maintaining the cellars at the temperatures most appropriate to the products being dispensed from them.
This has really paid off, attracting new more discerning drinkers to the bar, and significantly boosting our trade. We’ve also benefitted from fantastic support from the local CAMRA branch, who embraced these changes and chose to nominate us as their pub of the year.

• Which beers do you recommend to your customers and why?
We don’t recommend a specific beer per se. We recommend a beer according to palate, ie a dark beer or white beer, pilsner or fruit. So we may recommend a Paulaner for a wheat beer drinker or a Kriek for someone with a sweeter palate.

• Best selling beer?
At the moment our best sellers are Tennent’s on draught and Paulaner in bottles.

• Which beer did you most recently introduce?
Andechs Weisse Hell, Hacker-Pschorr Gold Export, Hofbrau Original and Brinkhoffs No1 Essen.

• How often do you introduce new beers?
We introduce four new beers every month or so. This month they have been German.

• Which qualities do you look for in a beer?
We look for recommendations from customers or we look for a type if we see a gap in the menu.

• Have you noticed an increase in demand for lower ABV beers?
No we have not had any noticeable market for low ABV beers; generally it’s taste and consistency our customers look for. 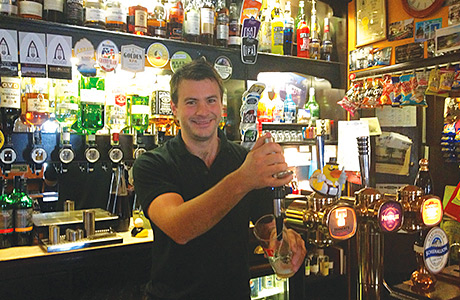 • Which beer did you most recently introduce?
We introduced two new draught beers around the same time last year: Bitter & Twisted from Harviestoun and Heverlee, which replaced another Belgian lager. Both have proved to be excellent alternatives.

• How often do you introduce new beers?
Our cask ale selection is ever-expanding and we try to keep up to speed with as wide a selection of bottled beers as our wee fridges allow, or whatever the customers are looking for.

• What qualities do you look for in a beer?
A good quality liquid, with good commercial support. Perhaps something a bit different from local competitors and, as always, desirable to regular and potential customers alike.

• How knowledgeable are your customers about beer?
Very! A generally older client base, who have memories of traditional Scottish beer types and brands, mixed with younger customers who are always on the lookout for something new, and cask ale drinkers, who have an amazing knowledge of brewing processes and various styles of beers, mean I have to work hard to keep up with conversations in the pub.

• Have you noticed an increase in demand for lower ABV beers?
Not particularly. I have found that the quality and flavour of the beer is more important to my customers than the price or ABV. In six years behind the bar, the number of people asking for alcohol-free beer is minimal.