THE opening of Clerk’s Bar, on Edinburgh’s South Clerk Street, marks a new direction for operator Maclay Inns.
As well as a varied beer offer, the outlet, one of four Maclay venues in the city, has an emphasis on slow-smoked, barbecued food.
A former Chinese restaurant, the unit – which is split over two floors – had to be completely overhauled to create Clerk’s.
In a project that cost around £400,000, all the previous fixtures and fittings were stripped from the property and replaced with a design that takes in reclaimed wood, exposed brick walls and “industrial-style” furniture fashioned from reclaimed materials.
New feature windows were installed at the front and rear of the premises to create a brighter space, reinforced by bespoke, copper lighting, while further warmth is added by a coloured mural on the wall.
The result, said Maclay managing director Steve Mallon, is a “warm, welcoming, casual and relaxed neighbourhood bar”.
The seating is split between booths, regular-height and raised tables – some featuring reclaimed scaffolding for legs – while the bar was custom-built from reclaimed timber, with a bar top of polished concrete. In total, the main bar area can accommodate 60 covers.
The downstairs area, which is available for function hire, has its own bar and can accommodate a further 30 covers. 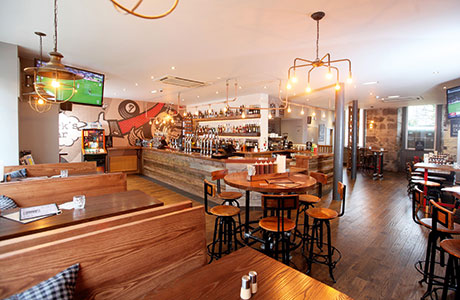 TVs have been fitted to the walls in both the upstairs and downstairs areas, with live sport forming another key part of the Clerk’s offer.
Beer is another core feature of the venue. Alongside a selection of permanent lagers on draught, the range includes six craft and cask taps, which are changed regularly. Craft and world beers are also found in the fridge.
Beer fans are also able to try ‘taster planks’ – three glasses of craft or cask beer, each containing a third of a pint, for £3.50 (cask) or £4.25 (craft).
But it’s on the food side where Clerk’s really struts its stuff.
As part of the revamp Maclay had a smoker installed in the kitchen, enabling the venue to smoke its own meats.
Subsequently the menu includes dishes such as Baby Back Ribs, Spare Ribs, Smoked Chicken and BBQ Pulled Pork, as well as a range of burgers, burritos and hotdogs.
“We believe Clerk’s has something for everyone,” said Mallon.
“There is an eclectic mix of customers in the area but primarily Clerk’s is targeted at a younger market, both male and female – students and young professionals and families who are looking for value for money, tasty BBQ-style food in a pub environment.
“This, along with a great sport offering and a good choice of craft and cask beers, wines and spirits, we believe sets Clerk’s apart from the competition.”