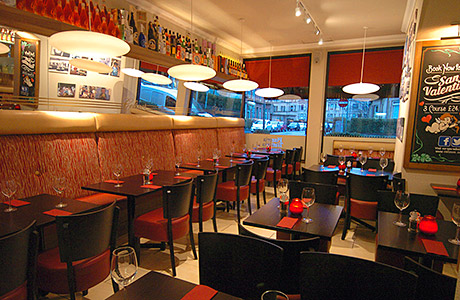 TUTTO per tutti or “everything for everyone” is the Italian motto of Celino’s Trattoria and Delicatessen in Glasgow – and a look around the outlet indicates the owners mean every word.

Italian produce features in every nook and cranny of the deli, takeaway, cafe and restaurant business, tempting customers into taking home a selection of the same ingredients used in the dishes on the menu.
It’s an approach that’s been in place since day one.
Celino’s has existed on Glasgow’s Alexandra Parade in one form or another for around 50 years. Originally a florist and fruit business, it was transformed into a deli and cafe in 1982.

We had diners but we knew we had to provide them with more comfortable surroundings.

However, the road to the business that exists today began in 2007 when Claudio Celino took over the family business from his father Natalino.
He purchased the adjacent retail unit and extended the dining side of the business from two tables to 48 covers by knocking through a gable end wall.
Claudio expanded the Celino’s team, hiring head chef Chris Rouse and head waiter Alan Magee, as well as promoting Jane Warren to assistant manager; and began trading seven days a week with extended opening hours to include evening trade.
Six years later and Claudio reckoned the interior was due another revamp.
“We had the diners,” he explained, “but we knew we had to provide them with more comfortable surroundings.”

A team effort, Claudio drafted in his cousin Leslie Celino, owner of the Andiamo restaurant chain, to advise on the new look interior for Celino’s, as well as consulting with Quinn McMahon Design and Michael McLaughlin of McLaughlin Contracts, whose firm completed the refurb over a three-day period in November 2013.
The most striking change at Celino’s is to the venue’s seating.
Additional fixed seating was introduced and a new booth was installed bringing the restaurant capacity up to 54 covers.
The plain wooden chairs were replaced with upholstered seats to match the new colour scheme.
The deli side of Celino’s also received a facelift with new counters from Glasgow-based Quality Equipment Distributors, while LED-lit shelves display the deli range to diners.
A less noticeable but, in Claudio’s eyes, crucial part of the refurb was the decision to fit out the trattoria with ‘Stable Tables’, from furnishers Satelliet UK.
Having himself been irritated by tables wobbling on Celino’s tiled floor when dining with his family, Claudio said finding a solution to the problem was a top priority during the revamp.
“Now, no matter where you drop it [a table], it self levels and locks,” said Claudio.
“They’re designed for cobbled streets.”
Celino’s bar was also extended as part of the refurb and, although coffee sales still makes up the bulk of the drinks sales, wine is predicted to grow on the back of a new wine list, introduced to tie in with the revamp.
“There’s nothing better than when you give a customer a wine list out and there are things they can’t get anywhere else,” said Claudio.
He said the venue’s range of Cinciano wines has become a particular strength for the outlet.
In July of last year Claudio, accompanied by chef Chris Rouse, head waiter Alan Magee, and Max Scacchi of Colosseum Wines, visited the Medieval village of Cinciano in Tuscany as part of a wine reconnaissance trip for Celino’s.
After sampling the wines on offer, Celino’s struck a deal to become the exclusive stockist of Cinciano wines in Scotland, with the wines available in both the restaurant and the deli.
The relationship between the deli and dining side of the business has been crucial to the success of Celino’s, which, since 2007, has evolved from a shop with five staff members to a restaurant and deli business with 24 staff, generating around 70% of its sales from dining.
Claudio attributes this growth to his relationship with the customers.
“What we did was give our customers something they were needing,” he said.

We have a real sense of community here and that’s been key to our success.

“Because we were here so long the name was established, so they trusted us. I think that’s why it grew so quickly.”
With little square footage to expand any further in Alexandra Parade, Claudio said future plans for Celino’s may involve an additional unit.
But he’s adamant that the city centre will not feature in any further expansion.
“I took a wee drive and went through a couple of areas and thought what a mistake it would be for us to do a city centre place,” he said.
“You need a sense of community through the place because that’s what keeps you going and pays the bills.
“You can come here at night in jeans and a T-shirt and the next table can be a chap in a suit and no one feels uncomfortable or out of place.”