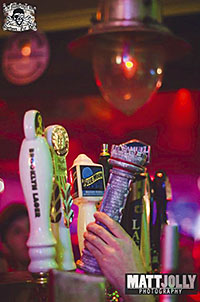 CIDER is helping to create a point of difference at two very different Scottish venues.
While The Moorings Bar in Aberdeen and the Squid & Whale in Glasgow may have different customer demographics and propositions, both have made cider into a key aspect of their drinks offer.
The Moorings Bar, on Aberdeen’s Trinity Quay, is a live music venue with a focus on draught beer and cider.
Originally offering 17 draught lines, a significant redevelopment last year expanded The Moorings Bar’s cellar and enabled the outlet to grow its draught capacity to 42 lines.
As well as a huge selection of craft and world beers, the bar offers a number of draught ciders.
Unlike the beer range, however, which includes a large number of bottled products, the cider focus is exclusively on draught.
Permanent ciders at the bar include Thatchers Gold; Thatchers Heritage and Thistly Cross Original, while guest lines include Janet’s Jungle Juice, from West Croft Cider; Old Rosie, from Westons; and a trio of products from Welsh cider maker Gwynt y Ddraig: Pyder (made from a blend of apple and pear juices); Fiery Fox and Black Dragon.
[pullquote_right]Price is considered, but it’s about what we think suits our image and our punters.[/pullquote_right]Manager Gareth Giles said the bar’s broad customer base, which spans students, office workers and members of the local branch of CAMRA, are “quite open-minded and like to try something new”.
“In general, the last couple of years, there’s been a surge in interest [in craft products] and it’s coincided with the fact that we’ve taken on more and more weird and wonderful things,” he said.
Smaller, craft producers are also a priority at Glasgow bar The Squid & Whale but, as a flipside to The Moorings Bar, the majority of the ciders at the Glasgow venue are in bottled format. Owner Colin Campbell told SLTN that when the outlet opened last summer, the thinking behind the cider range was “to offer as much variation as possible”.
“Like a lot of people, we’re tied on beer so when it comes to bottles and cans that’s where we take the opportunity to diversify and offer people something they wouldn’t normally get,” he said.
“Our attitude to cider is that we want to offer craft stuff, stuff from smaller (producers).”
The range of ciders in the Squid & Whale fridges includes Hazy Hog, from Surrey brewery Hogs Back, and Westons’ Old Rosie, as well as various flavours of both Thistly Cross and Swedish cider brand Rekorderlig.

Though he described the staff training on the cider range as “fairly casual”, Colin said each member of staff is “passionate about food and drink” and all make an effort to try the products in their spare time.
“Our approach to everything – beer, wine, spirits, food and cider – is that we read up on this type of thing and if there’s something we like the sound of we will try and source it from the distributor,” said Colin.
“Price is a consideration, but it’s not what we look at first. It’s about what we think suits our image or suits our punters.
“We have a strong idea of our image and the products that our customers will go for.”
These customers include young professionals in their 20s and 30s, said Colin, as well as students from the local area.
Stocking a range of cider styles is essential, he said, as – unlike customers at The Moorings Bar – the Glaswegian customers are less likely to experiment outside of their comfort zone.
“With beer drinkers you get two kinds – the people that will stick to one kind, and people who want to be adventurous,” said Colin.
“That happens less with cider.
“People tend to stick with the same thing.”