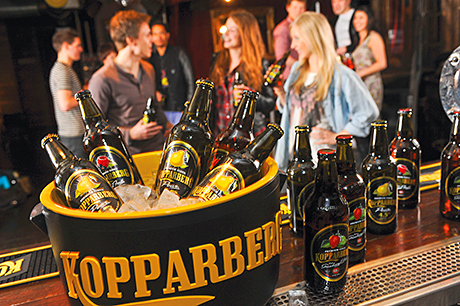 SWEDISH cider brand Kopparberg has credited a combination of good weather, consumer loyalty and a new marketing strategy with helping to boost sales of the brand in Scotland’s pubs and clubs over the summer months.

Sales of the fruit cider in the Scottish on-trade were up 140% in July and 116% in August compared to the corresponding months in 2012, according to the firm behind Kopparberg.
Sales across the UK on-trade as a whole were up 79% in July and 55% in August compared with the same periods in 2012.
Adrian Hirst, sales director at Kopparberg, said he expects the sales growth to continue in the coming months.
“The overall UK statistics are obviously fantastic, but in Scotland we’re seeing on-trade drinkers really go for the brand in a big way, which is great to see,” he said.
“2013 has already proved to be an extraordinary year for us, with our new above the line campaign, enhanced public relations activity and the great weather combining to break records within the business.
“This success is not possible, however, without the continued support of our on-trade customers who have helped Kopparberg establish and maintain its position as the leading fruit cider brand in the country. We are excited about September results, which already look set to continue growth on 2012 figures, as we turn our attention towards the winter months.”