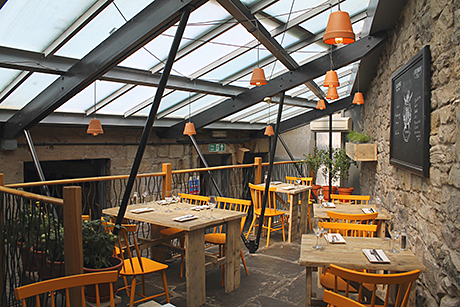 PROVENANCE is a big deal at the Edinburgh Larder Bistro.

Local produce features heavily on the menu at the restaurant, and runs through the outlet’s drinks selection.
And so it was logical that the local focus would also feature prominently in the outlet’s recent refurbishment.
Owner Eleanor Cunningham, the operator behind the Edinburgh Larder Cafe on Blackfriars Street, opened Edinburgh Larder Bistro on the city’s Alva Street in July last year.
This year as the outlet approached its first birthday, Eleanor decided it was time for the space to be given a facelift.
“I had a baby the same week that it opened last year, which is why we didn’t do a massive amount to the front of house,” Eleanor told SLTN. “We did a lot of work to the kitchen and we redecorated and things when we moved in, but we didn’t change any of the furniture, so it just felt like time to make it our own. Not only has it been the first birthday, we’ve taken on a new head chef and a new front of house manager, so there’s been quite a lot of change in the last few weeks.”
Working with local design firm Four By Two, the interior of the space was completely revamped.
The lighting was overhauled, with the previous spotlights replaced with a combination of recessed lighting, hanging pendant lights and even converted lobster creels.
New furniture was introduced throughout the restaurant and conservatory areas, with seating sourced online while tables were created by a local joiner from former scaffold boards.
The bar area was also re-touched, with old fruit crates used to create a new back-bar space.
A new lease of life has also been given to the menu through the recruitment of head chef Kenny Whittle.
While the food offer continues to focus on locally-sourced ingredients, Kenny has brought his own experience to the menu.
“It’s a similar theme but he’s just brought a bit of a different edge to it,” said Eleanor. “He used to be a forager and a fisherman so he has a good knowledge of wild foods in Scotland.”
The local flavour is evident on the drinks side, too, with a beer range that includes local brands Barney’s Beer and the Natural Selection Brewery.
New general manager Jade Linden also worked with specialist Edinburgh retailer The Bon Vivant’s Companion on the outlet’s spirits range, which includes Scottish brands such as The Botanist gin as well as a selection of spirits from further afield.
Despite the focus on premium products, however, Eleanor is determined to appeal to as broad a demographic as possible.
“Even though we do use a lot of the same ingredients as really well-renowned, Michelin-star restaurants we try and keep our prices affordable so that everybody can come.”