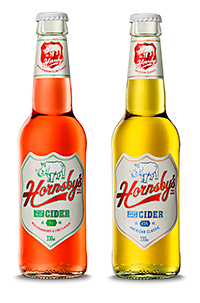 TENNENT Caledonian has launched US cider brand Hornsby’s in the UK on-trade.

Two flavoured variants, Crisp Apple (4.5% ABV) and Strawberry & Lime (4% ABV) have been introduced in 330ml bottles.
Marketed under the tagline ‘cider served the American way’, the UK packaging is said to be a reinterpretation of the US design, both of which feature a black rhino.
Hornsby’s was bought by Tennent Caledonian’s parent company, C&C Group, which also owns Magners, in 2011.