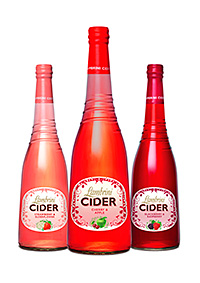 A NEW flavour of Lambrini Cider has been launched in time for summer.

Parent company Halewood International introduced the Cherry & Apple variant along with a new bottle design for the range, which also comprises Strawberry & Elderflower and Blackberry & Raspberry flavours.
Halewood said the new cider has been launched in response to growing consumer interest in fruit-flavoured cider in recent months. The new bottle design, meanwhile, is intended to achieve greater stand-out in back bar fridges, according to the brand owner.
“Consumers of Lambrini Cider have shown a real preference for dark fruit variants over the last year, and the Cherry & Apple flavour will complement the existing range perfectly,” said brand manager Lorna Tweed.
“The cherry flavour of Lambrini wine style drink has also proven to be extremely popular with the brand’s primary audience, and we expect Cherry & Apple to do the same for Lambrini Cider.”