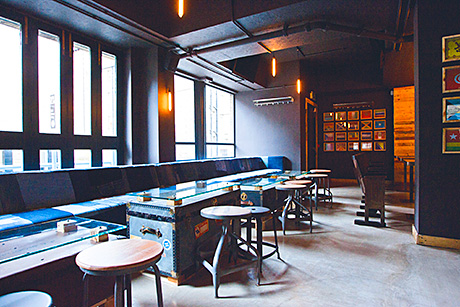 The outlet, formerly called Rush, underwent a seven-week refurb earlier this year as owner Attraction Inns sought to reposition the bar to appeal specifically to backpackers and students.
The company, which operates four other venues in Edinburgh and Stirling, has owned the Cowgate property for more than a decade and when it came time for a refresh managing director Robert Orr decided that he didn’t want “yet another bar”.
Heading up the redesign himself, and working with tradesmen as required, Robert was determined to use as many recycled materials as possible.
“I wanted to see how much we could get recycled rather than just doing what we always do, which is shut a place, rip it out and do it again,” he told SLTN.
Subsequently the majority of Pilgrim’s decor and furnishings were sourced from salvage companies around the UK, with Robert claiming he achieved his goal of using 98% recycled materials for the project.
Salvaged materials include the flooring, which is made from re-constituted stone from a demolished building; wood panelling on the walls, which is taken from stripped wood pallets; and a table with built-in ‘swing-gate’ seating that was sourced from a French monastery. Robert sourced further seating from a 1930s English cinema, which was about to be scrapped when he tracked it down.
“I said I was interested and suddenly they were like ‘well in that case give us a thousand pounds’,” said Robert.
“We could have just gone out and bought standard seats but in my opinion that would have been so boring.”
It’s not just in the main bar area that reclaimed items have been used.
The sinks in the toilets were sourced from a salvage company in Glasgow and had originally been installed in a school.
However, perhaps the main design feature in Pilgrim is the bar itself.
Lit from above by spotlights salvaged from an Edinburgh theatre, the bar has a frontage made from old suitcases sourced from charity shops.
The travel theme runs throughout the outlet, in keeping with its core target market of backpackers. Old chests have been pressed into use as tables and framed flags (the frames fashioned from left over pallets) adorn the walls.
The name, too, is derived from travel.
“Everyone that’s a backpacker is on some sort of pilgrimage,” explained Robert.
“If someone comes in here at 18, by the time they’re 24/25 they’re not coming here anymore.
“But the great thing about the backpacker/student market is your market refreshes every year. So you get the longevity out of it.”
The drinks offer at Pilgrim is designed to offer a point of difference, according to Robert.
Craft products have been given priority, both on draught and in the fridge, with brands such as Innis & Gunn and Blue Moon.
“There’s still a market for (mainstream brands), but I think the market is moving towards people that want a specialist product,” said Robert.
“They want to come in, see what you’ve got and try it. And that’s the core business we want to be in.”
A different approach has also been taken with regard to food.
Not considered a core part of Pilgrim’s business, and with the outlet limited in terms of space, the company out-sources its catering to a local bakery, which supplies fresh stromboli (an Italian pastry with a filling of meat, chicken or vegetables) every day.
Robert said the revamped outlet has been trading well since its relaunch.
And he said the Edinburgh bar could mark the beginning of a journey for the Pilgrim brand.
“If this works and we get this bedded in, I could see this being an idea we could roll out to other cities,” he said.
“I think there’s a market for that. But at the end of the day it still has to be a good bar; it still has to run properly, it still has to offer a good product and great service.” 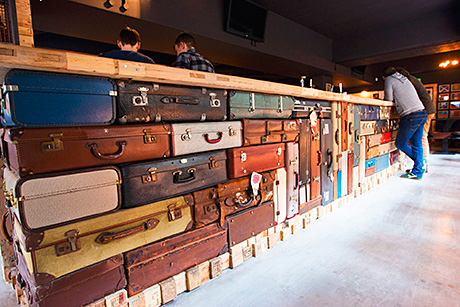 Images – Top, The refurbishment used 98% recycled materials, according to owner Robert Orr. Above, One of the main design features in Pilgrim, the bar frontage is made from old suitcases.