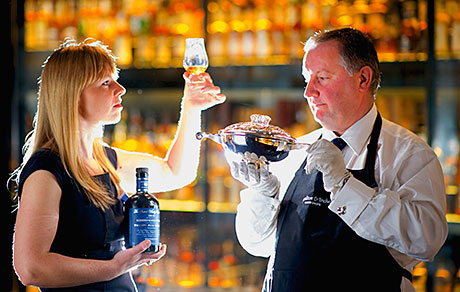 THE Scotch Whisky Experience has launched a new blended whisky to mark its 25th anniversary.

The Edinburgh visitor attraction has released just 252 bottles of the commemorative whisky, which is described as a blend of 25 year old malts from across Scotland.
It has also unveiled a specially-designed quaich to commemorate its silver anniversary. Featuring a lid set with a 275-carat citrene stone and gold plating on the inside, the quaich was created by Edinburgh silversmiths Hamilton & Inches and will be on display at the Scotch Whisky Experience for the rest of the year.
“Quaichs and whisky have gone hand in hand for hundreds of years, so we are pleased to mark our silver anniversary with this exquisite piece of work,” said Susan Morrison, director and general manager of the Scotch Whisky Experience.
“The quaich will go on public display for the rest of 2013 and we hope it proves as popular with our visitors as our record breaking collection of Scotch whisky.”

Image – Julie Trevisan Hunter of the SWE and Jon Hunt of Hamilton & Inches.