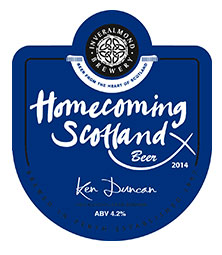 THE Inveralmond Brewery has created a special beer to mark next year’s Homecoming Scotland celebrations.

The Perthshire brewery has been named as an official partner of Homecoming, which will see hundreds of events take place across Scotland throughout 2014.
“The Glasgow Commonwealth Games and the Ryder Cup are just two events which herald a momentous time for Scotland,” said Inveralmond commercial director Bob Hogg.
“Homecoming Scotland Beer has been crafted to encapsulate the energy and presence of our incredible nation in 2014 and beyond.”
The beer will be available in cask and bottle formats from autumn of this year. It is to be available throughout the UK as well as North America and Europe.