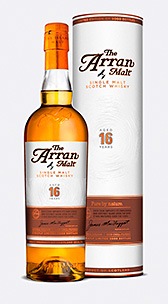 ISLE of Arran Distillers is set to release its oldest expression to date this month.

The Arran Malt 16 year old was laid down when the distillery first opened and will be available as a limited edition release of 9000 bottles.
The 46% ABV 16 year old whisky is the first in a series of three malts leading up to the launch of the Arran 18 year old malt in spring 2015.
James MacTaggart, master distiller at Arran, said the whisky “smells of honey and ginger and has a smooth taste with waves of sweetness and spice”.
“Our first 16 year old whisky encapsulates everything that is great and unique about Isle of Arran malt whiskies,” he said.
The release of the Arran 16 year old follows a victory for the distillery in the annual World Spirits Competition.
The Arran 12 year old cask strength single malt won a double gold award at the competition in San Francisco, which featured more than 1400 spirits from 61 countries.