Local chefs beat rivals from UK and overseas in contest 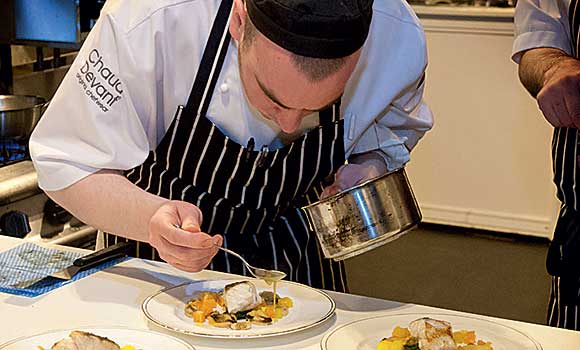 A TEAM of up and coming Scottish chefs triumphed over rivals from the UK and overseas in a contest at hospitality trade show ScotHot.

The group, headed by lecturer Scott Lyall of Adam Smith College and consisting of students between the ages of 17 and 23, scooped the top prize at the Scottish Culinary Championships, held as part of the ScotHot event in Glasgow earlier this month.
In addition to the top gong, the Scottish team also won the Hot Kitchen award and silver trophies in the Restaurant of Nations and Cold Display categories.
Other competitors in the Culinary Championships included teams of chefs from England, Wales and the United States.
The championships also saw trophies awarded to a number of professional chefs, including David Littlewood of Raemoir House Hotel in Aberdeenshire, who was named Scottish Chef of the Year, and Raymond Thomson of Stirling Management Centre, who won an award for Best Dessert.
“This year has been a huge success in terms of the culinary competitions – the standard is some of the best we have ever seen at ScotHot in its 40-year history,” said ScotHot event manager Soraya Gadelrab.
“It’s been exciting to watch the amazing creations that have been tasted and showcased throughout the three days and we are delighted to honour our hard-working chefs who are some of Scotland’s finest.
“Obviously Team Scotland has a lot to celebrate with their friendly win over their traditional rival, England, and our sincere congratulations go out again to David Littlewood who was the clear winner in the Scottish Chef of the Year competition.”
More than 8000 visitors from the hospitality, tourism and food service industries attended the show, which took place at the SECC from March 4 to 6.
As well as the culinary championships, ScotHot brought together a host of exhibitors, from local producers to global brands, with events like the New Product Awards and a number of seminars, demonstrations and talks on the Spotlight Stage.
In a first for the show, ScotHot also unveiled a list of the most influential people in the Scottish hospitality industry.
Scotland’s only two Michelin-star chef, Andrew Fairlie, was ranked Number One in the Hot Scots Power 40, which also featured fellow chefs Martin Wishart and Tom Kitchin and hotelier and Town House Collection chairman Peter Taylor.
Fairlie said he was “humbled” to have been ranked at the top of the list, which was compiled in association with Caterer & Hotelkeeper and in honour of ScotHot’s 40th anniversary.
“The award is made all the more special as it is voted for by my peers and it reinforces the message I try to convey with our younger team members: that hard work, consistency and respect for others is a recipe for success,” he said.
“The hospitality industry in Scotland is going through a really positive change at the moment and we have some of the brightest young talent coming through in all sectors.
“Thanks mainly to the work put in by most of the people on this list, who have been working tirelessly both in their own businesses and the enormous generosity of spirit shown in encouraging youngsters to join the best industry in the world.”

Image – Cooking up a storm: Scottish chefs beat rivals from England, Wales and the US.