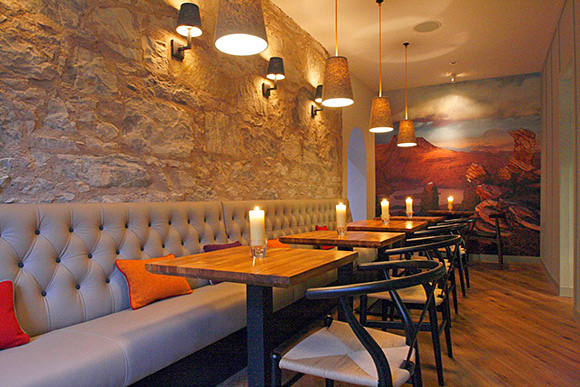 A NEW brasserie and gin bar has been launched at Edinburgh restaurant Stac Polly.

The ground floor of the Dublin Street eatery, which takes its name from the Stac Pollaidh mountain in the north west Highlands, has been refurbished to create the new space, while the original restaurant remains in the basement level.
Created by interiors firm Four-by-Two, the new space is said to combine Scottish heritage and modern design elements. Features include exposed stone walls, oak flooring and butcher’s block tables; a large photograph of the Stac Pollaidh mountain dominates one wall and there are ox horns on the mantlepiece.
The bespoke zinc-finished bar stocks a range of gins, including Scottish brands Caorunn, Edinburgh Gin, The Botanist, Hendrick’s and Blackwood’s, as well as London gins Tanqueray Ten, Sipsmith and Martin Miller’s. Two signature cocktails have been developed – an Edinburgh Raspberry Gin Fizz and a Gin Martini – and there’s a small selection of Scottish and European beers.
On food, French chef Stanilas André, who has worked at Stac Polly for 14 years, has devised a “modern-Scottish” lunch menu for the brasserie, with dishes including roasted wild pigeon breast with Stornoway black pudding, beetroot glaze and carrot slaw; poached mussels with white wine, cream, parsley and lemon; and roasted aubergine tarte tatin with melted goats’ cheese, winter leaves and tomato coulis. A menu of smaller dishes and snacks is available from mid-afternoon and throughout the evening.
The original restaurant in the basement has retained its overall look, which has ben paired with new tweed seat furnishings and curtains.
“Having operated successfully in Dublin Street for many years, we felt that the time was now right to move forward with an investment programme that would allow us to provide an enhanced environment and an even better set of offerings for new and loyal customers alike,” said owner Roger Coulthard.