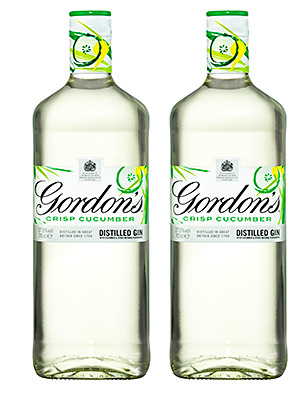 DIAGEO has launched a new range of flavoured gins under its Gordon’s brand.

Gordon’s Crisp Cucumber is a blend of the original London Dry gin with natural cucumber flavouring, which is designed to be mixed with tonic. Two ready-to-drink pre-mix variants – Gordon’s & Tonic with a hint of cucumber and Gordon’s & Tonic with a dash of elderflower – have been launched in can format.
The three new variants are being backed by a marketing campaign.
Nin Taank, Gordon’s brand manager at Diageo, said the range aims to help operators “capitalise on the growing consumer trends towards both gin and flavoured spirits”.
“Gin is the third largest spirit in the spirits category and is experiencing strong growth, up 12% in the on-trade and 5% in the off-trade,” said Taank.
“The new Great British variants celebrate the true versatility of gin, and are set to inject freshness and vibrancy into the category in advance of the key spring/summer season.”