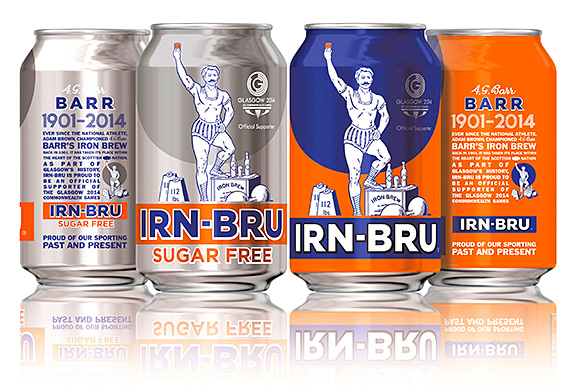 IRN-Bru’s status as an official supporter of the Glasgow 2014 Commonwealth Games is behind one of two bursts of activity kicking off this month for the soft drink.

Owner AG Barr is launching a series of limited edition Irn-Bru cans to celebrate the brand’s role in next year’s sporting showpiece in Glasgow.
The first limited edition design features the illustration of Highland athlete Adam Brown, which appeared on the first Irn-Bru labels in 1901.
Adrian Troy, head of marketing at AG Barr, said the company is confident demand for the Commonwealth cans will be high.
“Interest in the 2014 Commonwealth Games is already extremely high, particularly after the success of London 2012, and this is a chance for retailers to play their part in the build-up to an event that is anticipated to attract one million spectators and a global TV audience of 1.5 billion,” he said.
The second burst of activity will see Irn-Bru back on TV screens from March 18.
The three new ads, which will run for 16 weeks, form part of the new Irn-Bru Gets You Through campaign, which will include special packs, dedicated POS, a new website and social media activity.

Troy said the new activity aims to build on last year’s Gets You Through TV ads, which he said formed part of the most successful TV campaign in the brand’s history.
“The message from last year’s TV advert really struck a chord with consumers,” said Troy. “It resulted in £3 million of incremental sales for Irn-Bru during the campaign – that’s the equivalent of seven million cans.
“This year’s campaign will reinforce the message that whatever life throws at you, Irn-Bru ‘gets you through’.
“The new adverts will once again reflect the cheeky, maverick attitude for which Irn-Bru is well-loved. With this wide-ranging activity really engaging consumers with the brand, we expect a surge in demand for Irn-Bru.”