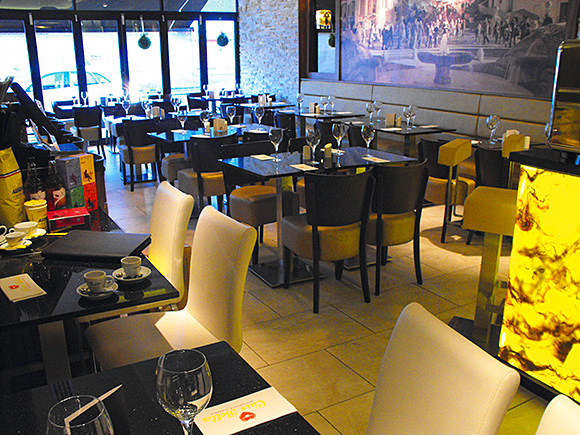 IT’S fair to say Renato Delvecchio brought local knowledge into play when he opened a new restaurant – his first ever – in Burnside.

Renato’s family has been running Dellos fish and chip bar in the town’s main street for the past 30 years.
So if anyone was able to judge whether the area could sustain a new restaurant, located just five doors down from his existing business, it’s him.
“I’ve always thought that if someone opened an Italian restaurant here and fitted it out properly they would be on to a winner,” he told SLTN.
“I knew that if we could run one of the busiest fish and chip shops in Glasgow for such a long time, attracting people from all over the area, then we could do the same in the restaurant trade.”
It already looks as though his hunch was spot on. Since opening its doors on December 10, trade at Ciao Bella on Stonelaw Road is said to have been “non-stop”.
Indeed, when SLTN spoke to Renato last week it came shortly after his first day off in six weeks – a reflection of the hectic opening period the business enjoyed in the run-up to Christmas.
A huge landscape photograph of the Spanish Steps in Rome leaves guests in no doubt about the Delvecchios’ links to Italy’s capital city.
With its muted shades of browns and creams, sleek lines, exposed brickwork and sumptuous furniture, the interior is redolent of the best contemporary Italian restaurants Scotland has to offer.
Renato’s vision was realised in partnership with a team of specialists, including Mark Brunjes, managing director of the award-winning CM Design, whose collaboration with the operator involved significant construction work to the rear of the premises, formerly occupied by a hairdresser.

The idea had been turning over in my mind for years. To see it become reality is a dream come true.

The fit out was delivered by Dimension Shopfitting of Bishopbriggs, which has previously worked on Colin Beattie’s Oran Mor and Lynnet Leisure’s One Up in Glasgow, and Saltire Taverns’ Le Monde in Edinburgh.
Sandro Formisano, founder of Clydebank-based New Concept, was charged with overseeing the design and installation of a brand new kitchen in a newly-constructed basement area.
It also supplied the furniture and other catering equipment, including the coffee machine.
Sandro’s involvement in the trade dates back to 1980, and he has contributed to a number of significant restaurant openings in Glasgow, many specialising in Italian food. These include La Vita, on the corner of Queen Street and St Vincent Street, and three Paperinos restaurants (Sauchiehall Street, Byres Road and St Vincent Street), as well as Citation in the Merchant City.
To that extent New Concept was a natural choice for Renato when commissioning suppliers to help him turn his plans into reality.
Sandro said he was impressed by Renato’s drive to execute a project that began at a time when most on-trade businesses are bracing themselves for the pre-Christmas rush.
“It took about 12 weeks from start to finish and that included an extension to the rear of the property,” Sandro recalled. “It took a brave man to take on a project like that during the run-up to Christmas but Renato did it successfully.
“Space was an issue and we had to think carefully about how to maximise the seating area and get the best out of it.
“It was Renato’s first restaurant venture but he had the budget to do it right and it worked out very well.
“In fact, in my 30 years’ experience it is probably the quickest turnaround I’ve been involved with.”
For Renato, however, the project was a little longer in the making.
“The idea has been turning over in my mind for years,” he said. “Burnside has been crying out for an Italian restaurant like this so to see it become a reality is a dream come true.”

Image – A landscape picture of Rome’s Spanish Steps dominates one side of Ciao Bella in Burnside.