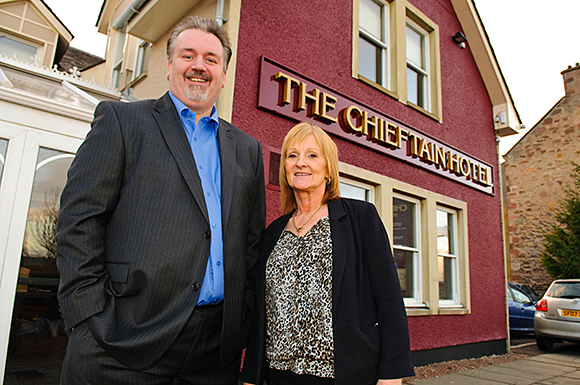 AN Inverness hotel is starting the new year in style after a £350,000 refurbishment.

New licensee Liz Lawson oversaw a five-week refurbishment of The Chieftain, on Milburn Road, before re-opening the hotel in December.
The project, which was funded jointly by Lawson and Punch Taverns, saw each of the hotel’s 14 bedrooms updated with new furnishings and decor said to reflect a more contemporary style.
The refurb also included the creation of a new sports bar, complete with pool tables, dart boards and plasma screens.
In the lounge bar, an internal wall was removed to create an open-plan area, while bi-folding doors were installed to separate the function room.
As well as the physical changes, the hotel’s restaurant menu has been updated, serving what is described as “traditional, home-made food” – and there are plans to hold special food events such as a curry night, steak night and the ‘Chieftain Chilli Challenge’.

The investment has utilised the space in the public areas more effectively and upgraded the hotel’s appearance.

The sports bar will stock two cask ales, one of which will change regularly.
Speaking ahead of the relaunch, Liz, who also runs Culloden pub Blacksmiths (also a Punch property) with partner Kenny McNellan, said: “I’m excited about taking on my second site with Punch and I’m thrilled with the new look – the hotel has been totally transformed so much so that people can’t believe it’s the same place.”
She said the hotel had already received positive feedback from customers as well as “lots of food bookings” and a booking for a wedding party in the hotel’s function room.
“Previously the hotel was tired and dated; the investment has utilised the space in the public trading areas more effectively and upgraded the hotel’s appearance throughout,” she added.
“We now offer something for everyone, whether it is a comfortable room for the night and a hearty home-made meal or real ale in the public bar with live sports coverage.
“My daughter, Kerri Love, will be managing the hotel and we are very excited for the grand reopening.
“We are looking forward to welcoming some old and new faces back to the Chieftain to try the new food and drink in the new look surroundings with the same warm and friendly service.”
Punch Taverns’ partnership development manager Gavin Stevenson said he is confident the newly-refurbished hotel will be a hit with tourists and locals.
“The hotel looks great, it has a modern and fresh appearance and this is matched by the high quality service standards which will be offered by Liz, Kerri and the team,” he said.
“It’s great that Punch can invest in its pubs and when considering the hotel’s location, we could see the Chieftain’s potential for local residents as well as tourists. The hotel has already proved popular with people eager to see the new look and facilities and I have every confidence that Kerri and the team will grow the pub from strength to strength.”

Image – Punch Taverns’ Gavin Stevenson with The Chieftain’s licensee, Liz Lawson. The hotel is the second Punch property that Lawson has become involved with.