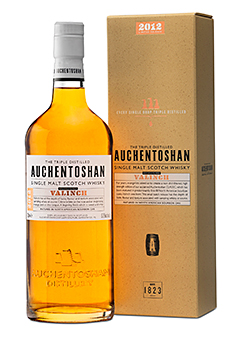 Auchentoshan 1966, 1979 and Auchentoshan Valinch are aimed at whisky enthusiasts and collectors.
The 1966 has been matured for 44 years in American ex-bourbon barrels. Only 257 bottles (priced at £4500) have been produced, with each presented in an individually numbered aluminium and oak case.
“Auchentoshan 1966 is a whisky of exquisite elegance with a delicate yet intriguing bouquet capturing the pinnacle of the distiller’s art and remaining true to its triple-distilled house style,” said Rachel Barrie, master blender at Morrison Bowmore Distillers. “As Auchentoshan matures through the decades in bourbon casks, the fresh citrus aromas intertwine with the American white oak, evolving whilst maintaining the beautiful triple-distilled structure.”
The 1979 was fully matured in first-fill Oloroso sherry butts. Bottled at cask strength, the expression has been non chill-filtered to intensify the flavour. Only 1000 bottles have been released worldwide, priced £350.
The Valinch, meanwhile, is a cask-strength version of Auchentoshan’s standard expression, Auchentoshan Classic. It is the second release of the Valinch, having first been out in 2011.