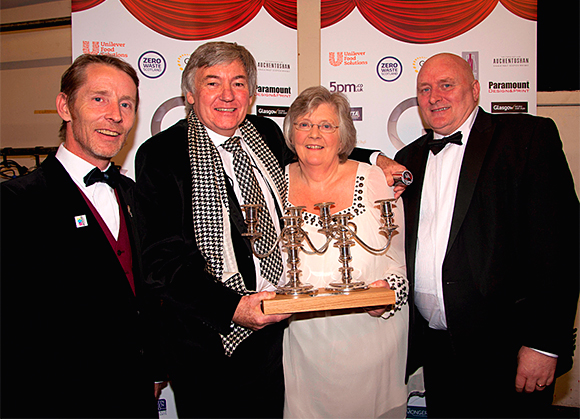 LAST year ended on a high for several of Glasgow’s top restaurants when they were presented with trophies at the Glasgow Restaurant Awards.

The event, attended by more than 500 representatives from the city’s restaurant industry, saw Italian restaurant Amarone named Overall Best Restaurant, and take the Smart But Casual award.
Other award winners across the 19 different categories included Lychee Oriental, which was named Best Newcomer, and Brian Maule at Chardon D’or, which won in the Posh category.
The awards scheme was relaunched in 2010 as a biannual event, and in 2012 was expanded to include several trade categories. This year’s winners also included Arisaig, which won the Best Use of Social Media, and the Cup Tea Lounge, which was named Greenest Restaurant.
Up and coming talents Morven Gibson and Claire Mcculloch, both of Restaurant At Blythswood Square, were named Young Chef of the Year and Aspiring Front of House Manager respectively.
Maurice Taylor, founder and CEO of hotel management firm Chardon Group, was presented with the Entrepreneurial Spirit award.
Speaking to SLTN Ryan James, chairman of the Glasgow Restaurant Association, said it’s “imperative” that the city’s restaurants are celebrated.
“The dining scene in Glasgow is probably one of the key tourism messages that we’re sending out: that Glasgow is the premier dining destination outside of London in the UK,” he said.
“I think that’s reflected by the way that the multiples are now trying to break their way into Glasgow. You can see the whole restaurant landscape changing.”
The event, held at Glasgow’s Citizens Theatre, also saw husband and wife Jim and Gilly Wilson, who have worked in several of Glasgow’s top restaurants, including Rogano and The Buttery, presented with the Lifetime Achievement Award.
“As a couple, they’ve both touched the lives of some of the most influential figures in the restaurant scene, not just in Glasgow but around the globe,” said James.
“So many people learned their trade from Jim and Gilly, but yet they’re not as famous as they should be.”
Accepting the award, the Wilsons said that they were “truly honoured”.
“To receive recognition from our colleagues and employers is absolutely great,” they added.