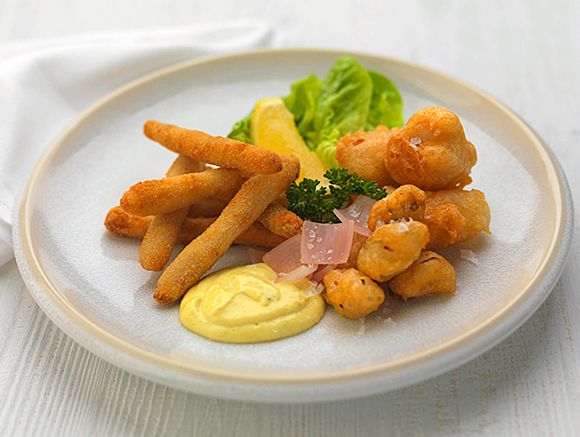 MARTIN Wishart has put a fresh spin on three classic pub dishes after they were highlighted as the nation’s favourite bar meals.

The award-winning chef was commissioned by Molson Coors to come up with a new take on prawn cocktail, fish and chips and sticky toffee pudding after research from Molson Coors identified the dishes as the most popular starter, main course and dessert on pub menus.
The poll, which found that a quarter of Scots ‘caught the eye of their partner’ in licensed premises, was based on the views of 1000 pub-goers.
Wishart said he welcomed the challenge of matching food with beer instead of the traditional wine, which Coors handed to him to “help publicans and chefs in pubs produce something different for their customers”.
And he told SLTN his recipes, each matched with a different beer in the Coors portfolio, were designed to offer a margin opportunity to licensees while being tasty, healthy and affordable to consumers. The dishes will be included in the chef’s latest seasonal cook book, which Molson Coors pledged to give free to Scottish operators.
“The three points I looked for were, firstly from a customer’s point of view, something that was interesting, healthy and sustainable,” he said.
“The provenance of ingredients is also important as well, so those [factors] were brought into the dishes.
“The cost of the dishes to the customer and the profit to the landlord were brought into it as well. I did a little research around local pubs in my area and they return a good GP for the publican but are still an affordable price for the customer. All in all it’s a winner for everybody.
“For the chef, too, it does show a little bit of creativity away from the standard battered haddock and chips.”
Health and ethics were uppermost in Wishart’s mind when devising the dishes.
His take on fish and chips, which he paired with Carling lager, includes golden Scottish salmon, coley and mussel bites served with creamy mackerel and potato croquettes. Wishart said the fish were caught from sustainable sources, with the mackerel cooked, pureed and combined with mashed potato to make croquettes instead of chips. The croquettes were coated in a rusk and deep fried to give a crispy texture; the batter used contains an ingredient that doesn’t soak up oil, making them healthier. 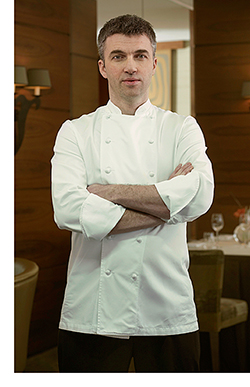 Wishart said there’s scope to offer the dishes at his Honours brasserie in Edinburgh, where the style is more “casual dining”.
“[The] fish and chips is something I’d perhaps put on as a special lunch at The Honours; the prawn cocktail is also something we’d definitely look to do as well,” he said.
“I drew some influence from customers and what they’re eating habits are from brasseries as well as pubs.”
Speaking more generally, he described the standard of pub food in Scotland as mixed.
But he said there are some great exponents in the trade and reckons that for those who get it right it’s a great way of attracting “new customers [and] families into pubs”.
“There’s a lot to offer in the way of beers in pubs, and if landlords get involved in food and beer pairing it can only be interesting for their customers,” he added.
“The good thing about beer is you can match it across different styles of food, whether that be Asian-influenced dishes, modern British style or perhaps Italian.
“Traditionally food and wine is seen as the ultimate match in restaurants, but even in restaurants now beer is being served in restaurant-style glasses and offered in flights.”