THE appearance of the festive ale is a sure sign that Santa’s on his way.

But what do beer drinkers look for in a seasonal special? And what difference can stocking a Christmas ale or two make to the bottom line at this crucial time for the licensed trade?
SLTN canvassed the views of brewers around the country on the questions above (and a few more), and found broad consensus on the issue of what makes a great festive beer.
“Traditionally, Christmas beers tended to be darker, maltier and fuller-bodied, in the style of a winter warmer [and] often enhanced with spices and other interesting ingredients,” said Stephen Crawley, managing director of The Caledonian Brewery Company.
“For some, a festive ale is the one they look forward to when coming home for the festive period, as they can’t get it when they live and work abroad.
“Chocolate, malty rich fruit and caramel flavours work well, which can be enhanced with cinnamon or ginger and other spices.” 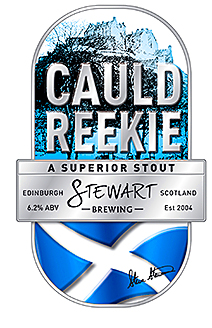 Steve Stewart, owner of Edinburgh’s Stewart Brewing, offered a similar view, suggesting that consumers like to sample ales that are “warming, full-bodied and spicy” at this time of year.
But while Crawley at Caledonian said there’s no hard and fast rule on how strong a festive beer should be – believing that brews of varying strengths can be enjoyed at different occasions – Stewart said there’s a tendency towards more potent brews at Christmas.
“It’s a good chance to try out darker beers with festive spices and fruits and also higher ABVs that are great for drinking with friends in a pub with a roaring fire,” he told SLTN.
“Our Cauld Reekie is 6.2% ABV and has a fiery cousin in Chilli Reekie – with added fire from real chillies! We also do a festive spiced Three Wise Men, flavoured with juniper, cinnamon and cranberries.
“People also seem keen to try a different beer over the Christmas period as they’re eating different food for a special occasion.”
Building on the theme, Fergus Clark, managing director of Perth’s Inveralmond Brewery, said while festive beers were traditionally on the stronger side, some brewers have reappraised that strategy more recently.
“It’s a more modern approach to keep the ABV on the low side, as we’ve done with (4.3%) Santa’s Swallie, as people like to be able to consume more than one beer in a sitting,” he said. 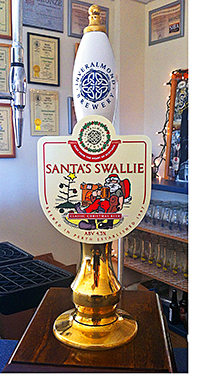 Opinions also diverge from brewer to brewer as to the importance of giving a festive beer a novelty name.
Plenty of brewers have given irreverent monickers to their seasonal swallies, be it Howell’s Frosty Bells (Belhaven) or Mr Snowballs (Harviestoun).
According to Clark at Inveralmond, “a degree of creativity and novelty is to be expected… especially those with limited release”, while Belhaven brewing director George Howell argued that a “humorous name is guaranteed to attract interest at the bar”.
However, Crawley at Caley contends it need not be a vital ingredient, partly because, he said, it’s hard to come up with something original now.
“Beer is a serious subject and whilst a bit of humour is great, most humorous Christmas puns have already been used,” he said.
“If the aim is to introduce festive beer to more people in a family or a food-orientated occasion then fantastic, but we want the beer and its enjoyment to be the hero and the humour to be created by the people enjoying it.”
Whether a funny name appears on the pumpclip or not, it seems most agree that the appearance of the festive ale can bring a welcome boost to brewers and operators.
“Providing choice alongside established, familiar brands is important,” said Belhaven’s Howell.
“Seasonal ales not only give brewers the opportunity to showcase innovation by experimenting with different styles, they also give customers the chance to trial new beers and seek out new flavours.
“Carrying ales that tie in with key calendar dates throughout the year also provides regular opportunities to boost sales.”
Both Clark and Crawley said a festive offering can tempt people to experiment with ale who don’t normally drink it.
“Because Christmas beers aren’t your typical beers, they open up the world of cask ale to those new to the category, offering a degree of charm that golden fizzy drinks can’t always compete with,” said Clark.