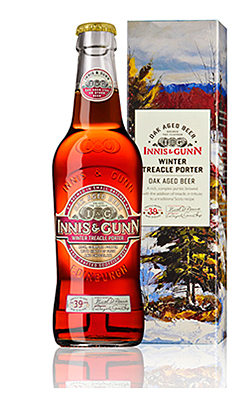 A LIMITED edition seasonal beer has given winter warmth to Innis & Gunn by selling out shortly after its release.

The Innis & Gunn Oak-Matured Porter (7.4% ABV) was based on a traditional Scottish recipe. Made with treacle, it was packaged in a decorative gift box and available in Sainsbury’s and Booths supermarkets.
“I was reading ‘A Scots Cellar’ by Florence Marion McNeill, a celebrated book on the history and tradition of beer and spirits in Scotland, and came across a brewing recipe over 100 years old,” said Innis & Gunn CEO Dougal Sharp.
“It incorporated treacle in the brewing process to add complexity and sweetness.
“I knew immediately that it would lend something special to a Porter-style beer I had long wanted to produce as a seasonal release and it most certainly has.
“It’s definitely one of those beers you would fancy drinking by the fireplace on a dark winter’s night.”
Meanwhile, 35 Innis & Gunn staff have just passed the Foundation Course run by beer education body the Beer Academy. The course, which leads to an NVQ level one qualification, was attended by I&G staff members from as far afield as the US and Canada.
Sharp said the training would help to give the company an edge in a highly competitive market.