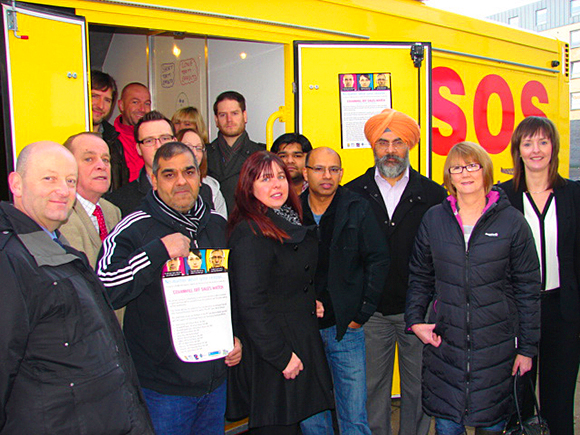 OFF-TRADE retailers on the south side of Glasgow have signed up to a new scheme designed to crack down on the number of adults attempting to buy alcohol for youngsters.

Under the No Matter What Your Reason campaign in Govanhill, off-sales owners and staff will be given information and training on the law and how to recognise when alcohol is being bought for young people; premises will also receive posters to display in their outlets warning members of the public about the consequences of carrying out a proxy purchase.
Eleven off-sales have signed up to the initiative, which is being backed by the recently-launched Govanhill Off-sales Watch, set up with the help of Glasgow licensing standards officer Julie Kane and constable Colin Whiteford of Strathclyde Police.
As well as reducing levels of underage drinking, the campaign, which will run until next September, aims to curb anti-social behaviour related to youths who are under the influence of alcohol.
A number of ‘diversionary’ activities are being advertised and delivered in the Govanhill area, with partners including Ultimate Soccer, Glasgow Community & Safety Services and Glasgow Life, on weekdays and Friday and Saturday evenings in a bid to discourage young people from drinking.
The campaign also includes health drop-ins for young people; these will take place on the SOS Bus, on loan from SOS Glasgow, which will be located near Govanhill Park on various Friday nights, and will include group work sessions on alcohol, drugs, tobacco and sexual health delivered by education staff from Glasgow Council on Alcohol and the NHS Health Improvement Team.
NHS Greater Glasgow and Clyde health improvement officer Lee Craig, who is organising the campaign, said it aims to flag up the consequences of buying alcohol for youngsters.
“Many people don’t realise that they could be fined up to £5000 and could receive a three-month jail sentence for buying alcoholic beverages for people under 18,” Craig said.
“The No Matter What Your Reason poster aims to raise awareness of this issue amongst the local community.
“We are also working closely with Strathclyde Police, Glasgow City Council licensing standards officers, Glasgow Community Services and local off-licences to try and discourage people from this practice.
“We will be providing off-licence staff with information about the campaign and the law, as well training them to recognise when alcohol is being bought for underage people.”
Inspector Eileen Taylor from Strathclyde Police said: “We will be working to reduce the availability of alcohol to young people by reminding licensees of their responsibilities, conducting visits to licensed premises and cracking down on street drinking.”
Councillor Jim Coleman also praised the Off-sales Watch in Govanhill, saying it will “give officers the opportunity to tackle concerns before they get out of hand”.
“Crucially, it will also let the trade play its part in improving and maintaining standards,” he said.
The new Govanhill scheme follows a similar campaign in greater Govan in 2009, which is said to have seen incidents of anti-social behaviour fall 62% during the six-month campaign.
“Research has shown that anti-social behaviour decreases and the number of people being reported for drinking in public drops during the campaign period,” Craig added.
“Off-licence staff also report increased confidence in refusing to sell to underage people or those acting on their behalf.
“Working in partnership with off-sales, the police and local organisations to deliver a comprehensive prevention, enforcement and diversion campaign is the key to achieving these results.”

Image – Govanhill off-sales have backed a new scheme to crack down on proxy purchasing.