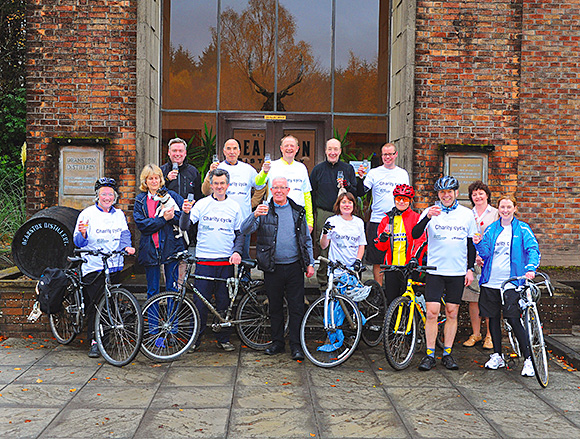 STAFF from the Scotch Whisky Association pulled off an impressive feat earlier this month when they raised more than £7000 for charity by cycling to all 107 Scottish distilleries.

The 2000-mile tour included trips to the south of Scotland and Orkney, finishing at the Deanston distillery in Doune.
Along the way the distilleries donated money as well as bottles that will be auctioned in the new year to raise more money for charities Macmillan Cancer Support and WaterAid.
At Deanston distillery, the SWA staff were joined by employees of Deanston parent company Burn Stewart Distillers and Stirling MSP Bruce Crawford.
“Our staff should be very proud of their achievement,” said SWA boss Gavin Hewitt.
“A lot of time and effort has gone into reaching this daunting challenge.
“Scotch whisky distilleries are often in very remote parts of the country so it’s not an easy cycle, especially this past summer with unpredictable weather conditions.”
The charity trek was part of celebrations marking the SWA’s centenary, which also include an exhibition opening at the Scottish Parliament today.