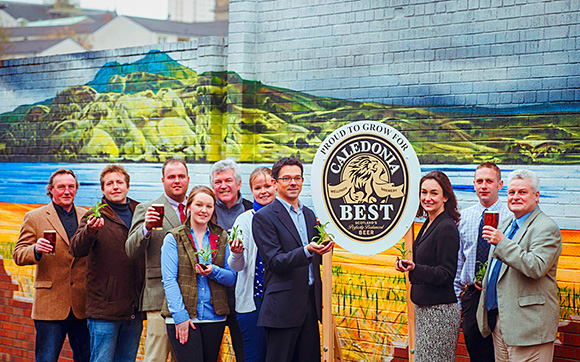 TWO Scottish microbreweries are in line for a cash boost from the brewer behind ale brand Caledonia Best.

The grants from the Caledonia Best Seed Fund, announced as the ale marked its first anniversary, have been handed to Eden Brewery in St Andrews and Scottish Borders Brewery near Jedburgh.
They were among seven applicants to receive financial support under the scheme, which seeks to back fledgling businesses in the brewing and farming sectors.
Eden, set up by Paul Miller earlier this year, received funding to buy machinery, while Scottish Borders Brewery, founded by John Henderson in February 2011, received backing for a collaboration with the Big Tree Society to develop beers made from foraged ingredients.
The Seed Fund raised £58,000 through a 5p donation from every pint of Caledonia Best sold in the first six months of the year.
Tennent Caledonian Breweries (TCB) worked with the National Farmers Union Scotland and Heriot-Watt University’s International Centre for Brewing and Distilling to decide who should be awarded funding.
“Everyone needs a helping hand when they start in business, and as one of Scotland’s oldest businesses and most experienced brewers, it’s hugely rewarding to be giving back at grass roots level through the Seed Fund,” said Paul Condron, marketing director at TCB.