ORIGINAL menus from the North Rotunda’s first stint as an Italian restaurant provided inspiration for the food offer at La Rotunda.
Twenty five years after his father, Jose, first managed the eatery, Antonio Carbajosa, business partner Kevin Campbell and general manager Patrick Collins sought to reinstate classic Italian dishes but with a contemporary twist.
The 100-cover restaurant’s location close to many of Glasgow’s major conference and entertainment venues, including the SECC, Clyde Auditorium and soon-to-open Hydro, also influenced the style of cuisine offered, with both the main a la carte and pre-concert menus featuring a range of pasta dishes and pizzas. 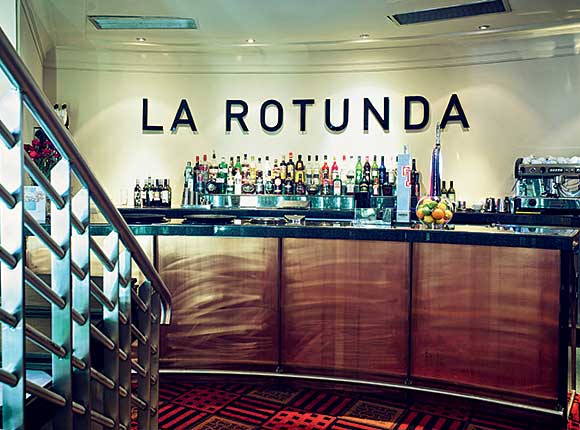 Antonio said the menu, for which ingredients are sourced from a number of suppliers, including Rodgers of Clydebank, The Fish People and Continental Quattro Stagioni, aims to offer customers “diversity and choice”.
“With the menu, just like in 1987, there are authentic dishes cooked the Italian way,” he said.
“We knew we wanted to take it back to Italian. A lot of it [trade] is pre-concert so we’ve got to offer good quality food quickly.
“One of my favourite dishes that my dad used to serve me was the fresh stonebaked pizzas and I’m proud to now be serving the same high standard of produce 25 years on.”
On drinks, La Rotunda offers a range of draught and bottled beers, including Tennent’s and Peroni on draught, sourced from Belhaven. The wine offer, supplied by Bibendum, includes 13 whites and reds, three rosés and four sparkling wines and Champagnes.