Lanarkshire operator Harry Hood wows the crowd as he accepts the 2012 Award for Industry Achievement, while Ayrshire’s Malcolm Simpson is named Entrepreneur of Year 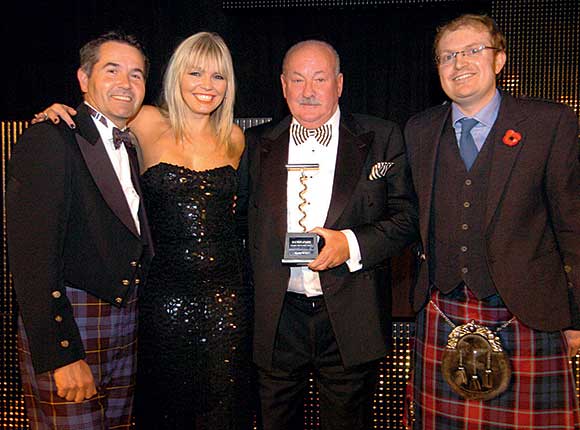 THE 2012 SLTN Awards reached a fitting climax when Lanarkshire publican Harry Hood received two standing ovations as he collected the Award for Industry Achievement, in association with Maxxium UK.
The Award was a deserved tribute for an operator who took his first steps in the trade more than four decades ago, when he laid the foundations of a family business, Lisini Pub Co, that continues to thrive and grow in Glasgow and Lanarkshire today.
Hood, who was starring for Celtic when he bought his first pub in 1970, aged just 25, proved a popular winner, with guests enjoying an acceptance speech that brought laughter, tears and tributes to his family and staff.
SLTN editor Scott Wright said Hood’s longevity was down to a willingness to move with the times while staying true to the values his business was built on.

Despite the challenges, he turned his dream into reality – Kate Thornton on Malcolm Simpson.

“As the landscape of the on-trade has changed over the past four decades, Harry Hood has shown great versatility and a willingess to adopt new ideas,” he said.
“His pubs, for example, were among the first to move successfully into food – well before the smoking ban came into effect. But what hasn’t changed is unstinting commitment to customer service.
“While he is not as hands-on in the business as he once was, he remains an important ambassador for the group, and can be seen in the outlets every day, talking to customers and ensuring that service levels continue to meet the standards he set.
“He also continues to be a vocal supporter for the trade on business and political matters.
“The award is a fitting tribute for one of Scotland’s finest publicans.”
The presentation of the Industry Achievement award came after Malcolm Simpson, co-founder of Ayrshire hotel operator SimpsInns, was named the SLTN Entrepreneur of the Year, in association with Punch Taverns.
Simpson received the award for the creation of the stunning Waterside Bar and Restaurant in Seamill – a project that also saw his company walk off with the gong for Refurbishment of the Year, sponsored by Business Cash Advance. 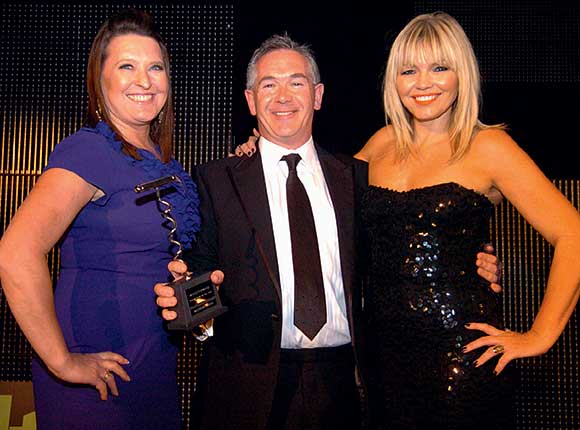 “In the current economic climate, with banks pulling back on lending and consumer confidence low, completing the project was no easy task,” said Awards host Kate Thornton prior to inviting Malcolm to receive the entrepreneur award.
“It didn’t just need serious capital to revive the property, it needed a whole new hospitality vision, founded on great service, great food and great value… and no shortage of risk taking.
“Despite the challenges, Malcolm Simpson had the nerve, resources and track record to turn his dream into reality.
“Drawing customers from around and beyond is native Ayrshire, the Waterside’s New England-inspired interior has a wow factor that’s exceeded only by its stunning views of the Clyde estuary.”