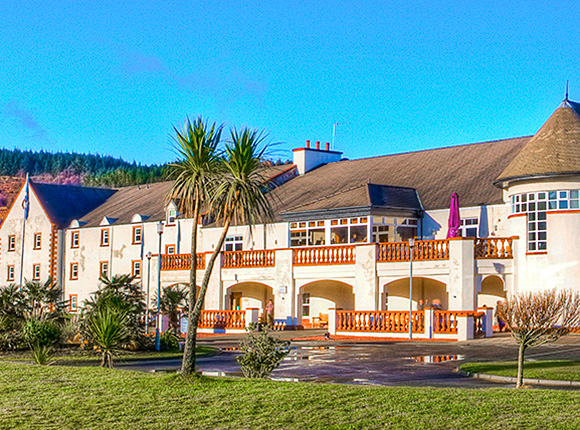 Coupled with early winter weather predictions that Scotland could see temperatures of -18ºC, it seems hoteliers and bar and restaurant operators are facing costly bills to ensure customers and guests are kept warm this winter.
But it seems there could be ways to cut energy bills significantly – and help the environment at the same time – as the team at Auchrannie Resort on the Isle of Arran discovered.
The installation of a biomass boiler in one of the two hotels in the resort has halved its energy bill, and prompted it to consider rolling out the technology to others areas of the business.
As Ronnie Mann, finance and development manager at Auchrannie, told SLTN last week, the decision to extend the use of biomass was a no-brainer.
But he admits taking the initial leap two years ago was daunting – not least because of the capital outlay required.
With a 28-bedroom country house hotel, 36-bedroom spa hotel, 30 holiday lodges, two swimming pools, bars and restaurants, a children’s Play Barn and its own laundry facility, the resort requires a substantial amount of energy to operate.
And as the cost of oil and electricity continued to rise, coupled with growing environmental awareness, the management team decided to investigate biomass heating systems.
Auchrannie sought advice from the Carbon Trust, which conducted a survey of the resort and assessed the heat loads to determine the optimum rating of biomass boiler required.
With the project priced at £195,000, the next hurdle facing the team at Auchrannie was funding.
The resort managed to secure a £95,000 grant from the Forestry Commission and a £100,000 interest free business loan over five years to fund the scheme.
And so, in June 2010, the 300kW wood chip biomass boiler was installed at Auchrannie House Hotel.

It makes a lot of sense to reduce your carbon footprint and it makes good business sense.

The boiler is housed in a container, which had to be located on a pre-laid concrete slab and then connected to existing services. It was positioned next to the laundry, which is one of the resort’s major heat loads.
Heating for the remaining loads, including one swimming pool, guest bedrooms and a restaurant, is distributed via 90m of underground insulated pipes laid as part of the project.
And it seems there’s no difficulty sourcing fuel for the boiler.
A local company supplies Auchrannie with wood chip from trees on the island, with the resort paying for the fuel based on the output of the boiler (and, therefore, the quality of the wood chip) rather than tonnage.
Ronnie said the running cost works out at around 3.5p per kilowatt, compared to more than 10p per kilowatt for electricity or oil, resulting in significant savings on the hotel’s energy bill.
And he reckons the savings will have covered the cost of the boiler in the next couple of years.
“We’re saving £23,000 a year on running cost, which is a good direct saving,” said Ronnie.
“It is a hefty capital outlay but the savings we’re making are paying the loan back and at the end of the five years that saving will be ours.
“When the Scottish hotels sector is being hammered by commercial rates, energy costs are one thing you can do something about.
“The Carbon Trust was very helpful; it examined the scheme and checked the figures.”
Auchrannie is also aiming to take advantage of the Renewable Heat Incentive (RHI) – a UK government-backed scheme designed to incentivise the uptake of renewable energy technology by making a payment to the owner of the system for every unit of heat generated by a biomass boiler. The initiative could generate Auchrannie a further £23,000 a year.
The savings and incentives have encouraged the team at Auchrannie, which achieved a VisitScotland Green Tourism Silver Award last year, to implement a similar biomass heating system in the resort’s spa hotel.
Ronnie said the project, which could be completed by April, will cost around £350,000.
“There are no grants available and a small business loan won’t go that far so it has to stack up but the payback is around four years and there’s the RHI on top of that,” he said.
“It is a major capital outlay. Like any business at the moment with profits restrained it makes a project like this quite difficult but [the lender we’re aiming to work with] is quite forward-thinking on environmental issues.”
And it’s not just biomass technology that’s been helping Auchrannie cut its carbon footprint.
The resort bought a compactor last year, which is credited with helping it cut its annual refuse collection bill by around 50%. Auchrannie also has its own recycling centre.
Ronnie said the individual measures add up to substantial savings for the resort.
“It makes a lot of sense to reduce your carbon footprint and it makes good business sense too,” he added.
“And we find more and more guests are demanding these things now.”

Image – The team at Auchrannie Resort on the Isle of Arran aims to install biomass technology at its spa hotel after the system halved the energy bill at the resort’s country house hotel.

Trade can reap the recycling rewards