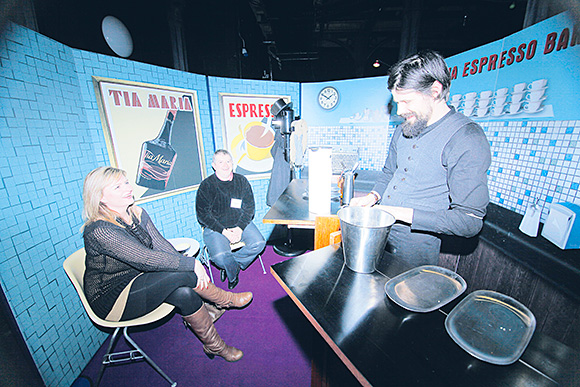 ORGANISERS of the Boutique Bar Show have hailed its first ever Glasgow event a resounding success.

Bartenders from across Scotland and the north of England travelled to the Old Fruitmarket on Candleriggs last week for the third annual Boutique Bar Show north of the border.
It was the show’s first in Glasgow after two years in Edinburgh. And, according to organiser Andrew Scutts, attendees weren’t disappointed.
This year’s Scottish event brought together more than 20 boutique drinks firms and a host of industry experts under one roof for one day only.
It kicked off with the Boutique Business Seminar, entitled ‘financing, designing and building your bar’. The talk heard from Steven Kenee, investment director at Downing LLP, who gave an overview of the range of non-bank funding options available, and Phil Waggett of contractors WFC, who spoke about the relationship between bar owner and contractor.
Beyond the seminar the trade show featured a number of other talks, including ‘the 30 cocktails that changed the world’ by drinks historians Jared Brown and Anistatia Miller; ‘the science of distillation and flavour production’ by Georgie Bell of the Scotch Whisky Malt Society; and ‘creating the Blythswood cocktail menu’, by Mal Spence of Glasgow hotel Blythswood Square.
Bartenders battled it out in two cocktail competitions.
Glasgow bartenders failed to retain their crown in the Brugal Rumble competition, with the team from Newcastle taking the spoils this year, while Tim Robinson of London-based bar events company Twist won the Luxardo Masters of Maraschino competition; Peter Merheb of Le Pont De La Tour in London was second and Will Cox of Monteiths in Edinburgh took third place.
In the main events space, boutique drinks firms showcased a range of small-batch spirits and craft beers; while award-winning London mixologist Paul Tvaroh provided a molecular mixology experience, including a Tia Maria espresso, in the ‘secret bar’.
Scutts told SLTN last week’s event showed the progress the Boutique Bar Show continues to make.
“The talks were all very well attended and there was a nice breadth and depth of subjects,” he said.
“There was a nice balance of local producers and national agencies. It was a fantastic atmosphere and the feedback has been great.”