Gordon & MacPhail joint MD David Urquhart retires this autumn after 40 years in the family business. He looks back on his career with Scott Wright 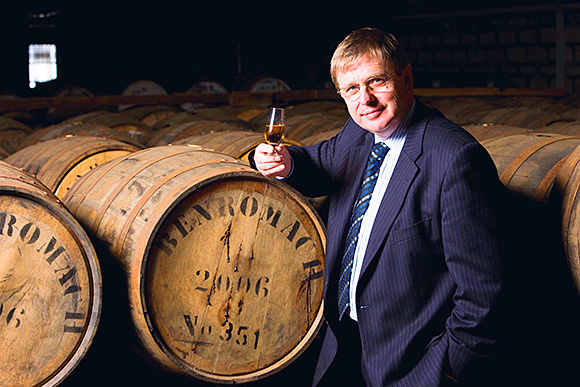 IT would be more than stating the obvious to say the whisky world, and indeed the whole licensed trade, has changed since David Urquhart joined his family’s business 40 years ago.

Part of the fifth generation to assume the reins at Gordon & MacPhail – the Elgin-based whisky merchant, bottler and distiller – he has seen the business adapt and grow as the fortunes of the industry and the on-trade have ebbed and flowed over the past four decades.
Now that the time has come to step back from the spotlight – brother and fellow joint MD Michael will lead the business for the next two years until it’s passed on to the next generation – David took time out last week to reflect on the progress G&M has made in his time.
The highlights have certainly been numerous: there’s been the successful launch of the firm’s very own distillery and single malt, Benromach, a steady growth in turnover and the expansion of its sales reach, both across the UK and abroad.
“Forty years ago our trading area was basically from Banff to Nairn to Tomintoul, and 90% of business was wholesale groceries,” David told SLTN.
“Now we have a sales team, covering from Shetland to Penzance, including Northern Ireland, we now export to 52 countries around the world and turnover has increased significantly.
“Of course the biggest dream of all has been building a brand like Benromach from scratch, and putting the disciplines in place to make sure that we protect its intellectual property rights and its integrity going forward, while at the same time trying to achieve the targets we set ourselves 12 years ago.
“Our overall objective is to get to 30,000 standard cases worldwide – and we’re getting closer to that figure.”
The job has brought David pleasure on a personal as well as commercial basis.
As co-leader of a company which began life as a grocer, tea, and wine and spirit merchant in 1895, he’s had the chance to meet people he admires (BBC world affairs editor John Simpson, sailor Sir Robin Knox-Johnston and entertainer Jimmy Logan to name but a few), and build valued relationships with customers and the Elgin community (he chairs the Elgin Business Improvement District and is involved with other local causes).
He also witnessed the warmth that’s often characteristic of the Scottish drinks trade as he dealt with major heart surgery nine years ago.
Yet when asked to reflect on how the on-trade has changed since the early ‘70s you get the sense he doesn’t feel it’s all been for the better.
He has seen retail chains like Oddbins and Thresher rise impressively only to ultimately bite the dust, and pub numbers steadily slide as supermarkets have come to dramatically influence the way alcohol is retailed in Scotland.
Consumers have changed too, with many now looking to spend their disposable income in ways beyond simply going to the pub for a drink.
As a result, David reckons today’s operators now have to work harder to drive business.
“There were certainly plenty of characters,” he said when recalling his early days in the industry. “I think the key thing is that you had communities.
“I can think of times going up north of Inverness and doing 120 calls a week. Now I don’t think we’d have 120 calls to do north of Inverness.
“People had hotels [40 years ago] and didn’t market them – they just expected people to turn up and say ‘have you got a room for the night?’
“Now you have to be very proactive to promote your business to attract people to come and stay with you.
‘“I suppose it’s the same with bars. Most have to go down the food route – in some cases between 60% and 80% of turnover now comes from food.”
On whisky specifically, he has seen enormous change. Back in 1972, when a bottle of The Famous Grouse cost £3.22 and a bottle of The Macallan £3.55, 176 million litres of malt whisky were being produced a year. That figure fell away to 97m litres a decade later before climbing up to the present 228m as exports have soared to destinations all over the world.
But it’s not only overseas consumers who appreciate malt, David pointed out.
“Different tactics work in different countries,” he said.
“The Far East is very popular with older aged products because they offer an alternative investment.
“In the UK there are a lot of discerning drinkers who are really into malt whisky and it is growing.”
Equally, David is confident that it’s the right time to stand down, safe in the knowledge that the firm is in good hands.
His twin sons, Richard and Stuart, work in the business, alongside nephews Neil Urquhart and Stephen Rankin.
“It’s always been the family policy that we move from frontline duties to become a backbencher, as I like to call it – a non-executive director and shareholder,” he said. “So I’m still involved in the company, but not on a day to day basis.
“It gives the next generation the chance to show their capabilities in driving the business forward for the next 30 to 40 years.”

Image – David Urquhart has relished his time leading Gordon & MacPhail with brother Michael but is ready to pass the baton on.