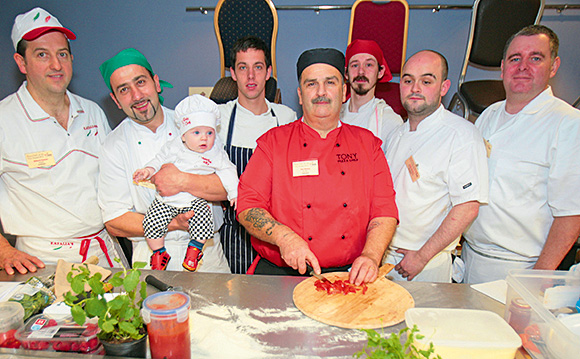 SCOTTISH chefs are heading to London next month for the final of the Pizza Chef of the Year competition.

The contest will see the winners of the recent Scottish heat, held at the offices of catering equipment supplier New Concept, pit their pizza-making skills against rivals from across the UK.
The Scottish contingent, which includes last year’s Pizza Chef of the Year winner, Tony Macera from Di Vito’s in Blantyre, will compete across four different categories at the final.
Macera, who won the Boursin cheese category in the Scottish heat, will be joined by Darren Smith of Battlefield Rest, who won the title in 2010 and was a joint winner in two categories – Whitworths Pizza Flour and Leathams Roquito Chilli Peppers – in this year’s Scottish heat.
Barry Dooey from Sandro’s Pizzeria in Johnstone was joint winner with Smith in the Whitworths category, with Philip McIntyre of Amaretto Ristorante in Bridge of Weir sharing the honours in the Leathams category at this year’s Scottish heat.
Roberto Scarano, of Eatalia in Edinburgh, and Tony Galici of Amore in Glasgow, were joint Scottish winners in the Dell’ami Harrissa category.

Image – Turning up the heat: defending champion Tony Macera (centre) will head a pizza delegation taking part in the UK final in London next month.