Has category finally shaken off its image as a fair weather drink? 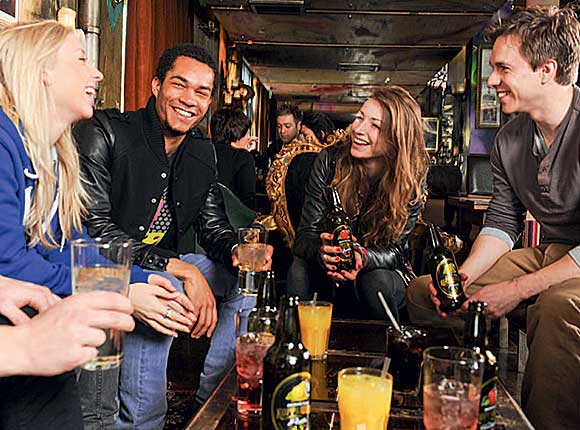 THE pursuit of perennial appeal has long been an ambition of cider firms for their brands.

From additional marketing activity outwith summer to the launch of limited edition winter variants, cider distributors and producers have pulled out all the stops to establish cider as a year-round drink.
After a particularly soggy summer, it seems cider has shaken off its image as a fair weather drink once and for all.
Figures quoted by Heineken UK, whose cider brands include Strongbow and Bulmers, show the volume of draught cider sold in the Scottish on-trade in the past 12 month was up 10%, with the volume of packaged cider up 6%. In the last quarter, sales of packaged cider rose 10% and there was a 7% uplift in the volume of draught cider sold in Scotland’s pubs and clubs.
Given that figures from the Met Office confirmed 2012 was the wettest summer in 100 years, and the second-wettest on record, the uplift in cider sales suggests consumers aren’t just drinking it when the sun shines.
Darryl Hinksman, head of customer marketing for the on-trade at Heineken UK, acknowledged that there continues to be a spike in cider sales during good weather, but he told SLTN the category is now well-established as a drink enjoyed in all seasons.
“Cider is buoyant and still growing; it’s good news for the on-trade,” he said. “I think the figures show it is established as a year-round drink because the weather wasn’t that good yet sales were healthy.
“We actually had the debate yesterday – what would it have been like if we’d had a good summer?”
The launch of new products and flavours – both seasonal limited edition ciders and permanent variants – is credited with broadening the category’s appeal and boosting sales.
And there’s more to come from Heineken UK, which introduced Strongbow Pear in packaged and draught formats earlier this year.
It plans to bolster its core Bulmers range (Original, Pear and No 17) with the launch of two new permanent ciders in spring, and it may introduce further limited edition ciders next year.
“Our research tells us that consumers who drink packaged cider want genuine provenance and heritage but they don’t mind if we play around with exciting new flavours,” added Hinksman.
“The fundamental thing for licensees is to get the right amount of space for cider. Generally most licensees are under-spaced for cider in the fridge.
“Operators should have a range of core apple and pear variants with a selection of flavours; a minimum of four: apple, pear and two flavours.”
That advice was endorsed by Rob Calder, head of marketing at Kopparberg distributor COS Brands, who said the growth in packaged cider is being driven by fruit-flavoured variants.
“A wide range might be right for some bars but I would say a structured range is more important than ramming your fridge with every new variant under the sun,” he said.
“A good range requires a structured approach, and this year we have been working with key customers to make recommendations on range, brands and fridge facings.
“One thing we’ve done at Kopparberg is to select and release seasonal variants, which sustains consumer interest in the category at different times of the year. This works well because it means we don’t overload the fridges with a constant stream of variants, which can diminish the offering, frustrate the trade and confuse consumers.”
Gareth Whittle, managing director of Rekorderlig distributor Chilli Marketing, said balance is key when it comes to deciding which ciders to stock.
“We believe ‘heritage’ brands and innovative flavours can and should sit side-by-side,” he said.
“Shelves are not elastic, yet it is important to grow your cider offering to cater for the huge category growth.
“As a brand, Rekorderlig has developed a range of flavours with different serves that excite drinkers.
“They encourage stockists to provide their customers as much choice as possible: whether that’s draught for tradition, bottled cider with innovative serves for a touch of theatre, or served hot like our limited edition Winter Cider. Seasonal flavours are helping to elongate the ‘summer only’ image that cider is trying to shed.”
The firm behind Stella Artois Cidre underlined the perennial appeal of cider, advising licensees to promote it in their outlets all year round. Tim Clay, on-trade sales director at AB InBev UK, also stressed the importance of the ‘perfect serve’ when it comes to cider.
“Licensees should offer a choice of ciders, combining well-known premium brands with regional varieties,” he said.
“With growth in the premium cider market, licensees should take the opportunity to give plenty of space to premium brands. When offering a choice of ciders, it’s important not to treat them all the same; different brands require different serving rituals.”
Kirsty Hunter, head of marketing for Magners, said it’s “imperative operators realise the importance of stocking leading cider brands”.
“Modern cider is still performing well within the category, but it is the popularity of flavoured cider which is driving real growth,” she said.
“With this in mind, Magners developed its Specials range, providing consumers with a premium flavoured cider offering unlike anything else on the market.”

Image – The growth in packaged cider is being driven by fruit-flavoured variants, according to the firm behind Swedish brand Kopparberg.