Drinks demos, industry talks and exhibitors from an array of niche and small-batch suppliers to covenene in Old Fruitmarket for third annual event 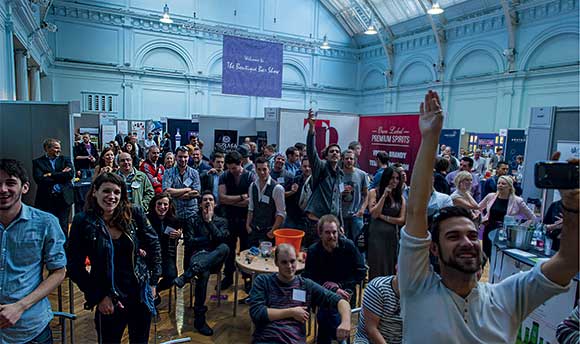 GLASGOW will become the centre of the universe for spirits enthusiasts in the trade later this month when the city hosts the third annual Boutique Bar Show.

The event, which will feature over 60 drinks brands from the world of premium and small-batch spirits as well as high profile speakers and competitions, is coming to Scotland’s biggest city for the first time after two successful years in Edinburgh.
The Old Fruitmarket in Glasgow’s Merchant City is the setting for this year’s show, which is expected to attract around 500 visitors when it takes place on Tuesday October 23.
The day kicks off at 9.30am with the Boutique Business Seminar, a presentation for aspiring bar owners that will provide advice on several key areas of opening a bar, including financing, finding a location and interior design.
This is followed at 12.30pm by headline speakers Jared Brown and Anistatia Miller, who will provide a history of mixed drinks and cocktails in their presentation, titled Thirty Cocktails That Changed The World.
Drinks historians, mixologists and writers, Brown and Miller have worked together for more than 20 years. As well as hosting masterclasses and writing for several notable drinks journals, the couple have published a number of books including Shaken Not Stirred: A Celebration of the Martini and Cuba: The Legend of Rum.
Other afternoon speakers include Glasgow’s own Mal Spence, head bartender at five-star hotel The Blythswood, and Georgie Bell of the Scotch Malt Whisky Society, who will talk about distilling and flavour creation, and how this knowledge can be applied to bartending.
Later in the day bartender website barlifeuk.com will host two competitions for Scottish mixologists. First, bartenders will be challenged to compete in the Masters of Maraschino Cocktail Competition, with the grand prize of a trip to Italy up for grabs, before teams from Glasgow, Edinburgh, Aberdeen and Newcastle face off in the Brugal Rumble.
Taking up where the Great Scottish Shake-Off event left off last year, the Rumble will challenge each team to create a punch that reflects the Brugal brand as well as the team’s home city.
Glasgow will enter the competition as defending champion after winning the Great Scottish Shake-Off in Edinburgh last year. Any contenders wishing to take part in the competitions can register at www.barlifeuk.com.
Aside from the seminars and competitions, there will also be plenty to see on the exhibition floor.
Returning exhibitors this year include distributors Marblehead, Eaux de Vie and Cellar Trends, as well as premium brands Ron Zacapa, Chase Distillery and Sipsmith Gin, while new names include TerrePURE UK, a company that says it can replicate the effects of barrel ageing on spirits in a matter of hours.
A controversial argument at the best of times, TerrePURE’s distillation techniques looks sure to be provoke debate in the homeland of Scotch whisky.
Also appearing at the show is a new product from Halewood International subsidiary Dockyard Distillers – a prohibition-style white whiskey drink called Bootlegger (see story right).
Guests in need of further refreshment will be able to enjoy a drink from renowned London bartender Paul Tvaroh of Lounge Bohemia – provided they can find his bar. Having proved hugely popular at the London show, the Boutique Bar Show will be bringing its Secret Bar concept north of the border to Glasgow.
Event organiser Andrew Scutts told SLTN he expects the event to appeal to bartenders from across Scotland – and not just those working in cocktail or style bars.
“This isn’t a show just for top-end cocktail bars,” said Andrew.
“It is for any business that wants to offer their customers something a bit different, new or interesting.
“If you’re a bar owner or a pub owner and you come along with your key members of staff, by the end of the day they will have learned a lot more about rums, whiskies and gins and they’ll come away really excited and enthusiastic about the industry.
“With pubs shutting every day, it’s more important than ever to offer a better customer experience.”
The show will be followed by an after-party at Glasgow bar and restaurant Metropolitan, hosted by Chinese lager brand Tsingtao.