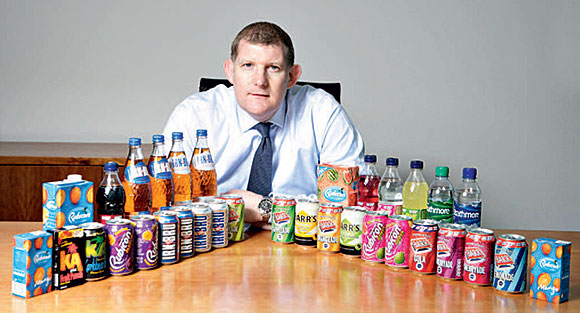 INCREASED raw material costs and a shift in consumer purchasing behaviour due to poor weather were said to have dampened the performance of soft drinks giant AG Barr.

The Irn-Bru owner, which confirmed merger talks with Britvic are “ongoing”, posted a 4.9% increase in total revenues for the six months to July 28, while volume was 2.8% ahead of the same period last year. Revenues from carbonates were up 5.5%, while still drinks revenues rose 1.8%.
But despite the “strong” sales growth, operating margins were said to have been hit by rising raw material costs, particularly sugar, and consumers shifting purchasing away from impulse outlets towards the “more promotionally driven” take-home channel.
Pre-tax profit for the six-month period was £14.9m, down from £16.2m the previous year.
Describing competition in the soft drinks market as “intense” over the six-month period, which took in the Diamond Jubilee and Olympic Games, AG Barr said its core soft drinks brands (Irn-Bru, Rubicon and Barr) are in “good health and well-positioned to continue to grow into the future”.
“We are particularly pleased with our financial performance given the ongoing challenging trading environment,” said chief executive Roger White.
“We have continued to outperform, delivering further consistent growth in volume and value ahead of a market which has seen volume declines in the period.
“In addition we have maintained investment in the long-term equity of all our core brands.
“Whilst we remain cautious regarding the second half, we have strong plans in place and are pleased to report sales in the first seven weeks of the second half have shown double-digit growth.”