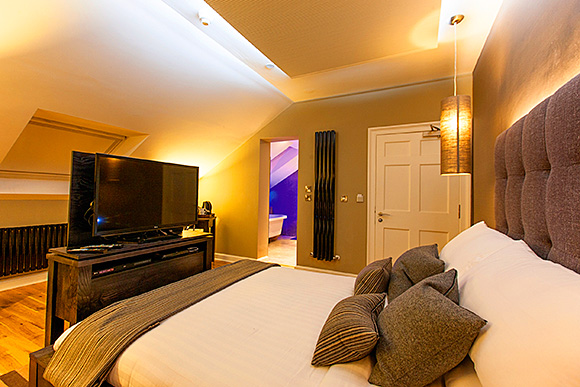 MARK Greenaway has set his sights on securing a five-star restaurant with rooms grading for Edinburgh business No.12 Picardy Place.

The chef has developed seven individually designed bedrooms and suites since taking full control of the Georgian townhouse earlier this year.
And he revealed last week that a further three suites could also be in the pipeline.
Greenaway told SLTN he’d always planned to develop the rooms but said the need became more pressing as the media profile of the business grew.
“With the exposure I gained on [BBC’s] Great British Menu, there’s obviously a lot more national interest now, which is why we had to develop the bedrooms,” he said. “We had three bedrooms which weren’t to the standard of the restaurant, so they had to be developed. With the national recognition we’re getting, it makes more sense to give people somewhere to sleep when they come for dinner.
“It just ties in a lot better, especially when you’ve got a building this size.”
The chef first became involved at the venue early in 2011, when he opened Restaurant Mark Greenaway at Hawke & Hunter, the multi-level venue owned by Brown Taylor. It was then decided by Greenaway and Barrie Brown that it made sense to drop the Hawke & Hunter name, so the restaurant was was duly renamed Mark Greenaway at No.12 Picardy Place.
Then, in April this year, Brown decided to pursue a “different direction” – Greenaway bought his stake and Brown is now pursuing other business interests.
With the help of investors, Greenaway has so far spent £250,000 on the rooms and suites, which the chef said have been designed to a standard and style in keeping with the restaurant, which holds three AA Rosettes.
There are currently seven in operation, four developed recently from a former whisky bar in addition to the original three (now revamped). Each has been kitted out with high-end technology and comfort, with features including “luxurious” bed linen, soaking tubs, rainforest showers, 3D/HD television and LED energy efficient lighting. Gourmet breakfast hampers are delivered to guests every morning, along with Sedbergh toiletries.
A further three suites may yet be developed in what is presently the first floor cocktail bar early next year. In the short term, Greenaway is considering turning the space into an upmarket wine bar. Then, if finances are in place, it could be converted into rooms, giving the business ten in total.
Greenaway said he was pleased with the progress the venue is making. “Business is good, it’s steady,” he said.
“From where we were last year, We’re a lot further down the road than where we thought we’d be, and that’s thanks to a lot of things, incuding the media attention – print, online and TV. Every good review helps – if customers are confident that they’re going to get a good product and it’s consistent, then they’ll make the decision to come here.”

Image: The rooms and suites at No.12 Picardy Place are designed to a high standard.