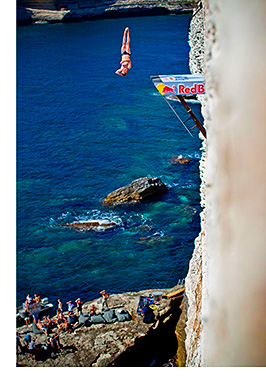 FANS of energy drink Red Bull were living life on the edge earlier this month when the Red Bull World Cliff Diving Series made its UK debut.

The event rolled into Wales earlier this month, with more than 1500 spectators showing up to watch divers take the plunge in Pembrokeshire in the penultimate stage of the 2012 World Series.
The contest sees competitors dive from a platform height of 27 metres – the equivalent of an eight-storey building. British reigning world champion Gary Hunt and former British Olympic diver Blake Aldridge were set to compete in the Welsh leg of this year’s event, which is due to conclude in Wadi Shab, Oman, on September 28.
This year’s competition will air as a seven-part series on TV channel Dave, following the divers around the world at each stop, including France, Norway, Portugal, Ireland and the USA.
“Our marketing campaign will drive awareness of the brand and give pubs and bars a real opportunity to drive incremental sales,” said Red Bull’s strategy and planning manager Gavin Lissimore.
“To take advantage of this increased awareness it is important to ensure Red Bull is visible to customers on the top shelf of the back bar fridge or in a Red Bull branded cooler.”