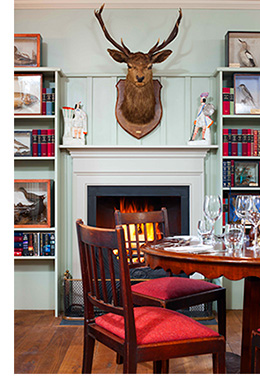 AN historic hotel on the banks of Loch Lomond has re-opened after an extensive refurbishment.

The Loch Lomond Arms Hotel, in the village of Luss, can trace its roots back to the 18th century, when it started life as a village inn.
More recently it was purchased by the Luss Estates Company, which has invested a claimed £3m in refurbishing the property.
The project included restoration work on the building’s exterior, as well as extensive refurbishment of the interior.
Each of the property’s 14 en-suite bedrooms have been individually styled and named after a different Scottish clan, with every room equipped with an LCD television, iPod docking station and Wi-Fi.
The hotel also has two 100-capacity restaurant areas, led by head chef Peter Wilson, as well as a private garden that will cater to events such as weddings.
The menu at the hotel features local produce, with dishes including pan fried fillet of hake and beef, sausage and mushroom casserole.
“Providing affordable luxury is something that is often stated but rarely achieved,” said general manager Alastair Borland.
“However this is exactly what we have accomplished at the Loch Lomond Arms Hotel.
“We have all the key ingredients, from our mouth-watering menu, to the matchless interiors and stunning surroundings, to make this one of Scotland’s most successful small hotels.”