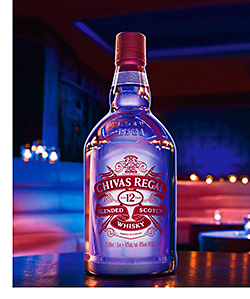 SOARING Scotch whisky sales helped Pernod Ricard deliver what it described as its strongest growth since 2008.

The French drinks giant recorded total sales of 8.2 million, excluding taxes and duties, for the year to June 30, up 7% on the previous year. Profit from recurring operations was up 9% to 2.1m.
Chivas Brothers, Pernod Ricard’s Scotch whisky and gin business, reported strong performances for each of its brands during the financial year, with its flagship blended Scotch Chivas Regal delivering 7% volume growth in the year to the end of June. The brand achieved record sales in duty free of more than one million nine-litre cases.
Royal Salute, Chivas Brothers’ ‘prestige’ blend, saw volume growth of 20% in the year, exceeding 200,000 nine-litre cases, while sales of single malt The Glenlivet rose 15% in volume terms to pass the 800,000 nine-litre case mark for the first time. The brand saw a value increase of 19% globally.
Blended Scotch Ballantine’s is said to have achieved a “stable” performance, despite the effects of the economic downturn in Spain and duty increases in France – the two largest markets for the brand.
Chivas Brother’s Beefeater gin posted a 6% volume increase in the year to 2.5m cases.