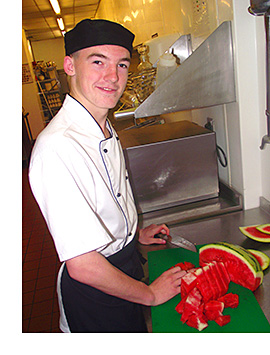 FOR many young people trying to break into hospitality, the traditional path into employment usually involves a stint at college or university.

But a Clydebank lad is proving ‘on the job’ training is also a fruitful option for youngsters taking their first step onto the career ladder.
Aspiring chef Thomas McCarrol fully intended to take the well-worn route through further education, but when he was given the chance to work full-time in a kitchen alongside a professional mentor he had a change of heart.
After leaving Clydebank High School, the 17 year old landed a part-time job as a waiter at Jury’s Inn Glasgow. He planned to return to college after the summer but a conversation with head chef Allan King convinced him he could fulfil his potential while working full-time.
“He seemed really keen on developing my skills and giving me the opportunity to learn, so I started working in the kitchen and learning from Allan,” Thomas explained.
The combination of working in a fast-paced environment under the watchful eye of a professional has paid off, with the head chef trusting Thomas with the responsibility of covering a weekend breakfast shift which involved cooking for more than 500 guests.
Since starting the level 2 SVQ in professional cooking in February, Thomas has made swift progress and is expected to begin level three before the end of the year.
After that he will be given the chance to specialise in his chosen professional discipline.
“Professional cooking and hospitality should be recognised as a viable career option and Thomas is a great example of what can be achieved,” Allan said.
“We’re big on developing staff at Jury’s Inn and to go from casual waiter to promising chef in one year shows our ability to recognise and nurture talent throughout employment.”
Thomas added: “I’m so glad this happened to me, rather than having to see someone else come in and get this job ahead of me while I was off studying.”

Image – Thomas is assessed at work by the Scottish Qualifications Authority.