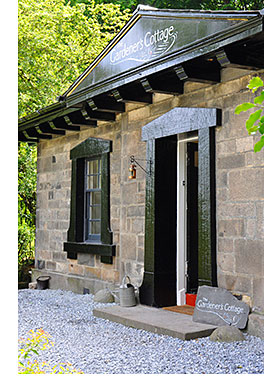 A NEW addition to Edinburgh’s dining scene is taking a fresh approach in more ways than one.

The Gardener’s Cottage is based in a 19th century B-listed building that had lain empty for six years before chefs Ed Murray and Dale Mailley transformed it into a new fine dining restaurant.
Its location in the city’s Royal Terrace Gardens gives the duo the opportunity to grow their own fruit, vegetables and herbs in the surrounding gardens.
A shared passion for seasonal food was the driving force behind the project, which also benefited from Murray’s previous training as an architect.
The restaurant features three dining tables, hand-crafted from reclaimed teak decking from Glasgow-built SS Olympia. Each is dressed with antique silverware and vintage crockery in keeping with a plan to make the most of the limited space available while remaining sensitive to the building’s historical and cultural importance.
The building was constructed in 1836, and the design by William Playfair included gardens laid out to include a path for Charles X, the exiled King of France, to walk from the Palace of Holyrood to church.
Murray and Mailley first realised their shared passion for seasonal produce when they worked together at The Atrium in Edinburgh.
Mailley has worked in the industry since he was 15 and his most recent position was executive head chef at the city’s Outsider and The Apartment restaurants.
Prior to that he was sous chef at The Atrium and worked at Michelin-starred The Kitchin in Leith, and previously held positions in London with two Michelin-star The Ledbury and a number of Max Hox’s restaurants.
Murray, who has lived in Edinburgh since his student days, was formerly head chef at Falko: Konditormeister, the award-winning bakery and cafe in Bruntsfield.
His career has also included spells at capital venues Cafe St Honore, Blue and The Atrium, where he worked under 2011 Scottish Chef of the Year Neil Forbes.