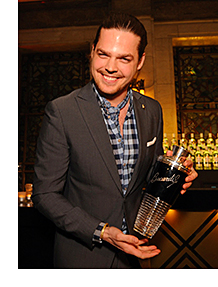 BARTENDERS across the UK are being invited to make cocktail history.

Registration for this year’s Bacardi Legacy Cocktail Competition is open and the firm behind the rum brand is urging bartenders to sign up.
Now in its fourth year, the competition invites bartenders to register their Bacardi-based cocktail at www.bacardilegacy.com by October 1, 2012. The contest is divided into four regional heats (Edinburgh, London, Manchester and Bristol), with the regional finalists then going head-to-head in the national final in London in February 2013.
The three most promising bartenders from the national final will then be given a budget and six months to market their cocktail in a three-way race to become the UK’s entry to the global final, which takes place in February 2014.
The UK’s winning drink will then go up against Bacardi concoctions from around the world for the chance to become part of the ‘legacy of Bacardi original cocktails’.