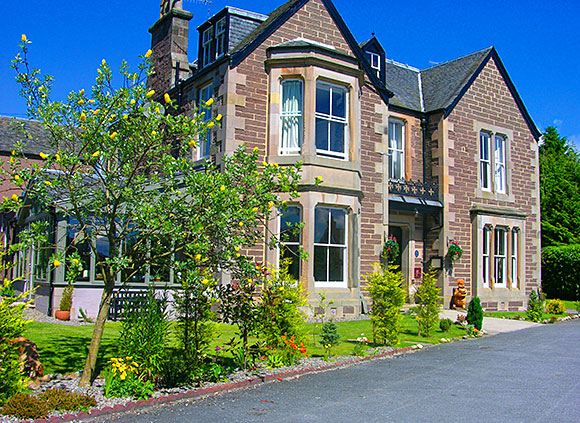 A HIGHLY regarded French-style bistro with rooms in Crieff has come on to the books of property agent Bruce & Co.

Yann’s at Glenearn House is an award-winning eatery that’s been featured in both the Michelin Guide and Scotland the Best, and received positive reviews on consumer websites Trip Advisor and booking.com.
As well as the 60-cover restaurant, the property includes six letting bedrooms and a two bedroom flat that is currently being used as owners’ accommodation.
The current owners say the restaurant is fully booked three weeks in advance at the weekends, with the letting rooms almost completely subscribed over the summer months.
The proprietors expanded the conservatory to the side of the building to accommodate more diners within the restaurant. As well as expanding the capacity by 20 covers, the area can also be used as a private dining space.
The restaurant with rooms is said to be located in an ideal tourist location, within easy reach of Glasgow and Edinburgh, as well as attractions such as the Famous Grouse Glenturret Distillery and Gleneagles golf course.
Bruce & Co is asking for offers over £899,995 for the property.
Meanwhile, the agent is also seeking a buyer for what’s claimed to be the first bed and breakfast in the Outer Hebrides to attain a green tourism award.
Jannel Bed & Breakfast in Stornaway is said to be a busy B&B that trades on a year-round basis.
Located within walking distance of the town centre, customers include tourists, business clientele and college students.
The owners say the green tourism award has made the business particularly popular with customers concerned about their carbon footprint.
The property itself is located in its own landscaped gardens and has been refurbished in recent years.
Described as being in walk-in condition, the property includes four en-suite letting bedrooms as well as owners’ accommodation, which consists of three double bedrooms, a kitchen diner and lounge.
Although all three bedrooms are currently used as owners’ accommodation, Bruce & Co points out that there is potential to use two as letting rooms.

Image: Yann’s at the Victorian Glenearn House has been awarded four stars by VisitScotland. It’s close to attractions including Glenturret Distillery.